IrishCentral Contributor Patricia Kileen considers the idea of "the maypole family" in relation to her late Uncle Packie Kileen, who lived in Co Offaly. 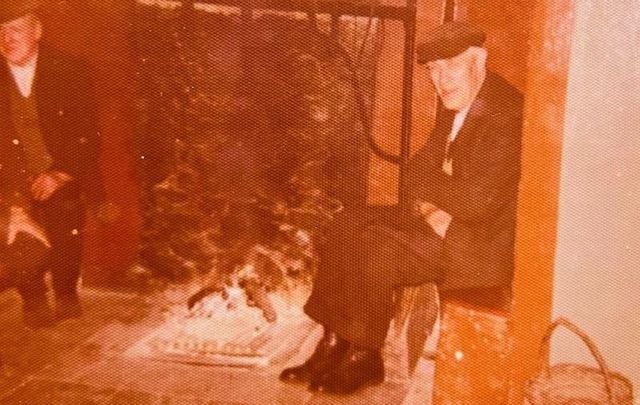 In the McGarry household Lusmagh, Offaly - Packie Killeen's (on the right) prime hearthside seat was reserved for him when he visited and watched the 6 pm news every day on RTE television. Courtesy Patricia Killeen

Christina Hardyment is a British author who is “fascinated with the historical background to our everyday lives – the way we run our homes and bring up our children.”

Based on her extensive research on families, she firmly believes that families “are in”. They are highly valued and will continue to be and their future is destined to be even stronger.

However, Hardyment’s idea of “the family” is not the classic nuclear family (a family consisting of two parents and their children, but not including aunts, uncles, grandparents, etc.), but a “maypole family”, which she describes as being a long (multi, even four generational, due to modern longevity) structure, with any number of strands winding around it. Her concept is a type of extended family including ex-spouses, ex-in-laws, reconstituted families, grandparents, friends, relatives, etc. A 13-year girl Hardyment interviewed said a family is “a group of people which cares about each other”. She didn’t believe that living together in the same household was a necessary criterion.

Modern-times legislation and other changes created new family structures in Ireland. Divorce legislation was introduced in 1996 following the 1995 referendum. (Legal separations, however, existed from 1989.) Same-sex marriages were legalized by the legendary 2015 referendum. For those interested in or studying the concept of family, Hardyment’s book “Predictions: The Future of the Family” is an interesting read and was part of a pre-millennium series in which some of the world's most distinguished academics and writers, in their particular fields, attempted to forecast the future.

In Ireland, “maypole families”, as described and predicted by Hardyment, are now often the norm. Recent images of Portland Row’s “large family” spirit supporting Kellie Harrington tugged on many a diasporic Dubliner’s heartstrings.

Grandparents, godparents, aunts, and uncles along with other relatives are strands of Hardyment’s “maypole”, often helping with childcare and providing precious support. The new lengthy friendships of our generation, some lasting from childhood to old age, are also strong strands.

It can be so difficult for today’s Irish working and middle-class couples to juggle their relationship, work and working from home, the exorbitant costs of housing, childcare, and the stress of all these elements, plus the high standard of parenting that is expected of them today. While the young often benefit from a “maypole family,” the elderly can also receive great support from a wider, generous “family.” Covid restrictions underlined the absolute relevance of the “maypole family” for many, when physical contact with people living in other households was so abruptly cut…

On a recent trip home to Ireland, I reminisced about the relationship my Uncle Packie had with his neighbors in Lusmagh, County Offaly.

Uncle Packie (1902-1982) was a bachelor, who as the youngest son didn’t inherit the family farm. He was a fantastic worker, an all-rounder, who could turn his hand to thinning turnips, cutting turf, thatching roofs, and even laying out the dead. His closest neighbors Mary and Stephan had ten children. He had his allotted, prime hearthside seat in their home, where he was invited to see the six o’clock news, on the television, every single evening.

He was like a surrogate grandfather to their daughter Ethna, now a mother of five young adults, who remembers how she used to bring him milk most days after school along with bringing in his turf and briquettes. She remembers how he bought her first-ever knee-high socks as a birthday present.

Packie kept his own council and sidestepping the norms of his times in the early 1900’s he apparently stayed in contact with his older sister; a single mother. Discreetly cycling to see her on a monthly basis was trailblazing in those old days of ostracizations. For him, kindness and mutual support seemed to outweigh the societal tenets of his times.

The night before he died, Ethna and he chatted later than usual as he had asked her to paint his cottage when her junior cert was over. She was so proud as it would have been her first paid, “grownup” job. However, mid-exams, she got word that he had departed.

Neighbors always checked to see him wave from his window as they passed on their bikes. When there was no wave, worried they immediately went in and found him, slumped over his walking aid, shortly after he’d passed away. His “Lusmagh quality of life” ensured he’d never been burdened by the frightening possibility of “dying and not being discovered for weeks” elderly people living alone often fear.

Packie was 80 when he died. I unfortunately only met him a few times. In my Dublin Jackeen’s child’s eyes, I perceived him as a kind, old-fashioned country gentleman. Through Ethna and her family’s perception, I realized he had also been a progressive, philosophical man and a member of their “family”.

Packie survived his parents and siblings, and flourished in the richness of his “maypole family,” before the concept was coined or penned.

It brings to mind the popular Offaly expression “that beats Banagher and Banagher beats the devil.” However, Derry’s Banagher also lays claim to that expression, but that’s another story!