It seems many in DUP hate Catholics more than saving Brexit

Saying no is the DUP blankie, their comfort tool which they can retreat behind rather than have to deal with political complexities. 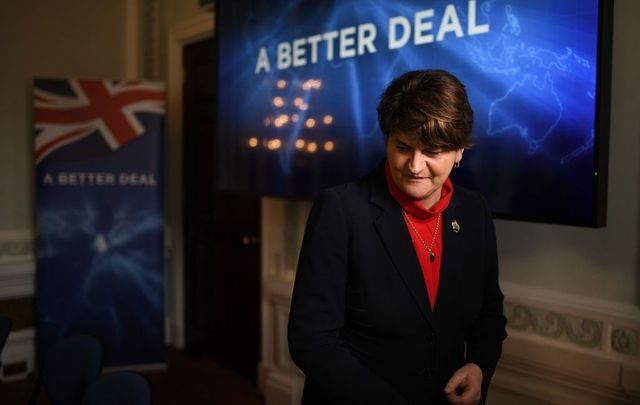 Leader of the Democratic Unionist Party (DUP) Arlene Foster after a press conference to offer an alternative Brexit plan on January 15, 2019, in London, England. Photo by Leon Neal/Getty Images

It was the week in which a bunch of young working-class unionists were secretly taped blasting out their favorite song “We Hate Catholics” in a Belfast bar. Oh, the shame! Soccer authorities reacted in deeply disgusted and shocked mode.

"Such despicable antics have no place in sport, in society or indeed in life,” said the local club, as if the teen goons had materialized from a different planet rather than the heart of the local Orange community

A few days later, the DUP issued their version, hating Catholics more than saving Theresa May’s backside in her battle to save Brexit.

Her plan would in some strange way break up the union by treating Northern Ireland differently, they said. Ulster must say no, they said, waving their orange banner.

Saying no is the DUP blankie, their comfort tool which they can retreat behind rather than have to deal with political complexities.

WATCH | @eastantrimmp: "Our position has NOT changed. If this goes through the people of NI will find themselves stuck with a legally binding agreement which puts NI outside the UK and could be there forever at the insistence of Brussels!" Hear, hear Sammy!  pic.twitter.com/9uKIIZj9D6

Despite the fact that a majority in Northern Ireland voted against Brexit, and despite the fact that their actions were playing havoc with the Good Friday Agreement, there was no way they would entertain any sophisticated political dialogue. “Just Say No,” they chanted, like the sheep in Animal Farm bleating, ”two legs good, four legs bad”

Their refusal to back May spelled the end of her hopes to escape from the Zombie prime minister role she has occupied by snatching a Brexit deal.

No surprise. All week the laughable notion had spread among British politicians and media that the DUP was for turning as chameleon politicians like Boris Johnson and Jacob Rees Mogg switched sides again in the desperate desire to keep their political ambitions alive.

The Brexiteers, the formerly leave at all costs from Europe “Hooray Henrys” were fracturing, and there seemed every chance that with a little more pressurize, more members would cast a vote for May that could actually mean a win on her plan to exit Europe.

That would leave it to the DUP to provide the final push to get May’s vote across the line.

The fact is that very many of the leadership and rank of the DUP, but not all unionists, let me add, actually despise Catholics and their fall-back position will always be to stop anything that might bring the day closer where they might have to deal with them in a real political manner. 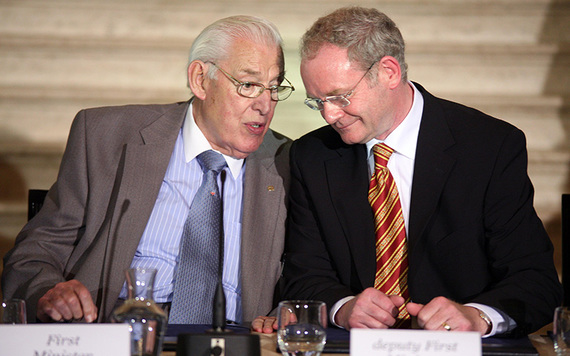 To their eternal credit, Peter Robinson and Ian Paisley once acknowledged that power-sharing was the right thing to do but that soon foundered once Arlene Foster and a retreat to basic bigotry began.

The notion that the DUP would come off their “No” position was absurd to anyone who knew the party and unionism history. This is a group that never voted for the Good Friday Agreement then or since. This will always be the party of ‘No’ whether it’s to Theresa May or power-sharing compromise.

In 1935, historian George Dangerfield wrote a seminal work called “The Strange Death of Liberal England” describing how, among other issues, Ulster Unionism’s intransigence destroyed the old once all-powerful Liberal Party.

It may be doing the same to the Tories now. Dangerfield ’s thesis holds true today. It is that “The Ulster Unionists love no one but themselves.”

Theresa May and her cohort are once again discovering the truth of that.