It's acceptable again to be anti-English in Ireland 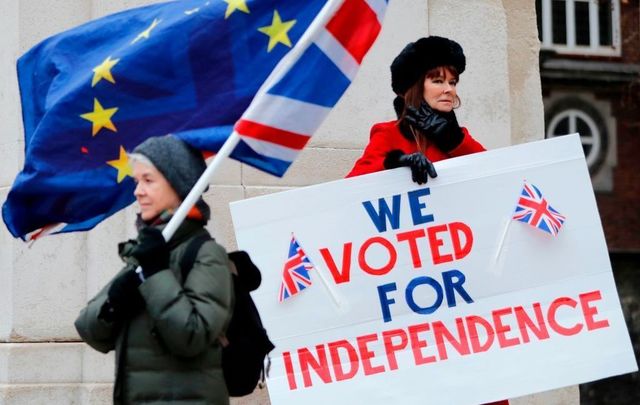 A pro-Brexit activist (R) holds a placard reading 'We Voted For Independence' as an anti-Brexit campaigner waves a European Union and a Union flag. TOLGA AKMEN/AFP/Getty Images

When I was a child, no visit to my grandmother’s rural farmhouse in Co Galway was complete without inquisitive questions about the bullet holes which could be seen above the bedroom window on the first floor.

We never grew tired of the stories about the infamous Black ‘n’ Tans, hauling women and children out of their beds in the dead of night as they searched for our late grand-uncle, who was one of the more notorious “terrorists” around the village of Caltra during the War of Independence.

We would ask about his friend, who spent years “on the run” living in hay-sheds and barns, getting fed in secret by housewives; and tried to imagine what it was like to lie under a bed as members of the British forces sprayed the family home with bullets.

And we marveled at how much life could change, that a man who was a notorious rebel in the 1920s would later become a respectable member of An Garda Síochana, the Irish police force, and play a key role in the birth of the Irish Free State.

When I was five, living right beside the border between Tyrone and Donegal, my friend had three fingers blown off by a discarded British Army grenade. The sky above Strabane regularly lit up when customs posts or businesses were blown to smithereens and, full of tears, I once begged my parents to move back to Galway and away from what became known as The Troubles.

Just 15 miles up the road, 14 innocent people had been shot dead by members of the British Army. Their “crime,” on what became known as Bloody Sunday, was to march for civil rights and demand to be treated as equals in a sectarian state.

The Irish Republican Army (IRA) used to claim that the atrocity in Derry was the biggest recruitment drive they ever had and young mothers like mine used to despair that a border zone mired in the conflict was no place to bring up a child. It made good people turn bad.

For my teachers in the 1970s and ‘80s, “West Brit” was the worst term of abuse in an Irish-speaking school. Graffiti in support of the IRA seemed to be all around us, even in Galway, and black flags flew in my neighborhood when Bobby Sands died on hunger strike in 1981.

The anti-English sentiment seemed to be everywhere. We despised the English football team and roared on any team who happened to play against them as soon as their supporters began to chant ‘Rule Britannia’ and ‘No Surrender to the IRA’ during World Cup games.

Eight hundred years of colonization, of displacement, victimhood, discrimination, and emigration ensured that it was perfectly acceptable to hate the English back in those days; before the Good Friday Agreement of 1998 brought, hope, prosperity, and a shared sense of respect between our two islands.

Queen Elizabeth visited Dublin, respect was shown when the English rugby team came to visit and ‘God Save The Queen’ was played at Croke Park. It seemed the hatred had died. We reveled in our growing friendship and maturity. Until now.

After 21 years of peace, Brexit has opened up so many old wounds. It has reminded people of how ignorant so many English people can be about Ireland, the Irish people, and our history.

So we have Karen Bradley, the Conservative politician whose job it is to administer Northern Ireland, telling us that British soldiers who murdered people during The Troubles did so “in a dignified and appropriate way.”

Given that her comments came a week before British soldiers could finally face trial for killing 14 unarmed peaceful demonstrators on the streets of Derry, Bradley would be forced to resign in a “normal” country.

But these are not normal times and the United Kingdom is anything but united.

The British politicians who lecture the Irish about the “hard border” have no interest in the huge disruption which Britain’s departure from the European Union will have on those who live or work all along the 310-mile (499-km) frontier.

Those people already knew that they were seen as little more than an inconvenience, or a minor distraction, when the people of England voted to leave the European Union in June 2016.

For the hard-line, some would say bigoted, Democratic Unionist Party (DUP), who have held the balance of power in Britain now for over two years, it seems nothing more than an inconvenience that 56% of Northern Ireland voters opted to remain.

People living in border communities, devastated by the prospect of a return to customs posts, lengthy delays, and maybe even British Army watchtowers; are regularly reminded by British politicians that their views don’t count.

For almost three years now, Irish people have had to listen to a stream of ignorance about Ireland coming across the Irish Sea.

If it wasn’t for the pesky Irish and their concerns about a hard border, apparently, Britain would be enjoying a very smooth exit from the European Union.

When I used to go scuba diving in Egypt every year, I was always shocked by the number of well-meaning English people who would ask me if I dived “back in the UK.” They literally had no idea that Galway, where I lived, was part of the Republic, freed from British rule since 1922.

That ignorance extends to Tory politicians. Boris Johnson MP lamented that Northern Ireland was “so small” and yet was dictating the whole of the British agenda on Brexit.

Last August, Jacob Rees-Mogg MP could see no issue with the return of the hated customs posts and police checkpoints which blighted the border throughout The Troubles. “It would be possible to continue with historic arrangements,” he said, dismissing 30 years of violence as some sort of minor inconvenience.

In January, a BBC radio presenter asked Ireland’s Europe Minister, Helen McEntee, why Ireland didn’t just “throw its lot in” with the UK.

His question might have caused guffaws in Ireland, given the island’s 800-year struggle against colonization, if it was not so serious in terms of the total ignorance of Irish history he displayed.

The British may no longer discriminate against the Irish, or shoot innocent people in cold blood in rural Galway villages or Derry’s streets, but the fallout from the Brexit vote has opened up old wounds and reminded the Irish of the horrors of our history.

Sadly, after 21 years of wonderful peace, people are being reminded on a daily basis of what it was like to be oppressed, treated like second-class citizens, denigrated, or forced to emigrate from our own land.

The Irish have not forgotten our past, to such an extent that it has even become quite normal for some people to hate the British – or more particularly the English – again.

It’s no longer unacceptable to hate the English again.