The Duke and Duchess of Cambridge had a busy schedule around Dublin on Tuesday as they commenced their first official visit to Ireland. 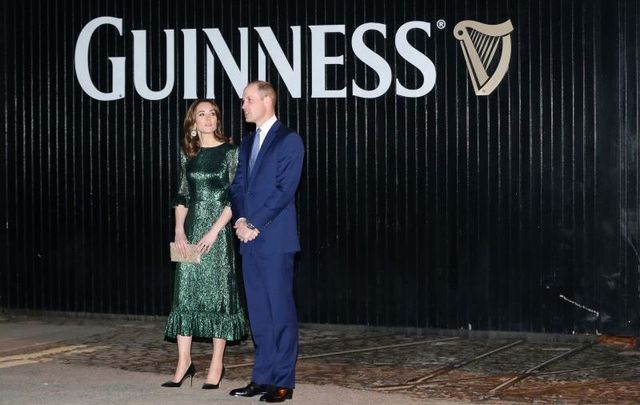 William and Kate concluded their first day in Ireland with a reception at the Guinness Storehouse in Dublin. RollingNews.ie

William and Kate, the British Duke and Duchess of Cambridge, arrived in Dublin, Ireland on March 3 for their official three-day visit which is meant to “focus on the relationship” between the UK and Ireland.

The royal couple had a busy first day which included an Aer Lingus commercial flight to Dublin Airport, a meeting with the President of Ireland Michael D. Higgins, a visit to Dublin's Garden of Remembrance, a meeting with sitting Taoiseach Leo Varadkar, all of which was topped off with a special reception at the Gravity Bar at the Guinness Storehouse.

At Dublin Airport, the Duke and Duchess received a warm welcome on a sunny yet chilly day. The Duchess stunned in a green ensemble:

The royal couple’s first order of business was a meeting with President of Ireland Michael D. Higgins at his residence, Áras an Uachtaráin. President Higgins’ beloved dog, Bród the Bernese Mountain Dog, help welcomed the royals:

With the President and his wife Sabina, William and Kate rang the Peace Bell, a symbol of peace and reconciliation between Britain and Ireland:

A statement from the President of Ireland later read: “The couples discussed the close ties between the people of Ireland and Britain and the importance of continuing and deepening close relations between all of the peoples of these Islands.

“President Higgins, Sabina, and Their Royal Highnesses spoke of the challenges ahead, including the implications of the UK's departure from the European Union and the importance of continuing to build on the foundations of the Good Friday Agreement.

“They also discussed the global challenges of climate change and biodiversity loss and the urgent need to revisit the fundamentals of how we organise our economies and societies if we are to tackle these existential threats in a meaningful way.

“The meeting at Áras an Uachtaráin was the third time President Michael D. Higgins and Sabina Higgins have met The Duke of Cambridge and The Duchess of Cambridge. They met in Belgium in August 2014, at the centenary commemorations of the start of the First World War, and in July 2016, at an event marking the centenary of the Battle of the Somme.”

Afterward, William and Kate paid a visit to the Garden of Remembrance, which is dedicated to those who gave their lives for Irish independence.  The couple observed  a moment of reflection as a wreath was laid:

Her Majesty The Queen laid a wreath at the Garden of Remembrance during her 2011 State Visit. The Duke and Duchess observed a minute’s silent reflection and a wreath is laid to pay their respects #RoyalVisitIreland pic.twitter.com/chXhOwC6x8

Next up for the royal couple was a visit with sitting Taoiseach Leo Varadkar and his partner Matt Barrett.

Taoiseach Leo Varadkar and his partner Matt Barrett welcome the Duke and Duchess of Cambridge to Government Buildings | https://t.co/kQaZqm59S9 pic.twitter.com/tvTp3BvzX8

Varadkar said it was a "pleasure" to host the couple:

It was a pleasure to welcome the Duke and Duchess of Cambridge to Government Buildings this afternoon as part of their visit to Ireland. pic.twitter.com/6at3JyF4ye

The final event for the first day of their official visit was a reception at the Gravity Bar atop Dublin's Guinness Storehouse:

? "It is not often that I find myself following The Queen @RoyalFamily to a pub!" — The Duke of Cambridge #RoyalVisitIreland pic.twitter.com/Lg1jfWhzAi

On Wednesday, the couple is set to visit community organizations in Temple Bar and Howth in Dublin, Prosperous in Kildare, and Grange in Meath. On Thursday the trip ends with a visit to Galway and a local GAA club, but Gardaí insists the city center will remain open for business.