US Ambassador to Ireland Edward F. Crawford angered a lot of Irish people after he tweeted that Ireland was looking forward to an upcoming visit from Mike Pence. 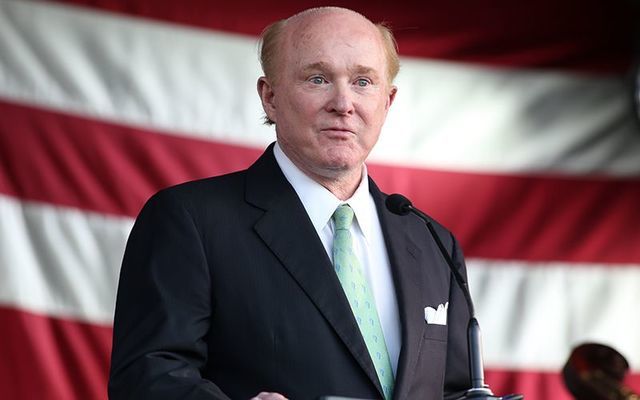 US Ambassador to Ireland Edward F. Crawford angered a lot of Irish people after he tweeted that Ireland was looking forward to an upcoming visit from Mike Pence.

The US vice-president has confirmed that he will be in Ireland from September 6-7, following visits to Iceland and Britain. He is expected to meet with Irish President Michael D. Higgins, Taoiseach Leo Varadkar, and Tanaiste Simon Coveney.

Crawford, an 81-year-old Ohio businessman who was confirmed as ambassador earlier this year, was sworn in by Pence in June. On August 16,  he tweeted: “Ireland looks forward to this important visit to Vice President Pence.”

The tweet from the ambassador sparked a social media backlash, HotPress.com reports.

“Ambassador you do not speak for Ireland, nor do I. But as an Irish person I do not welcome your Vice President who is a misogynist and presides over a system of family separation that just appears to value cruelty,” responded Dr. Shivaun Quinlivan, a law lecturer at NUI Galway.

No we absolutely don’t welcome the @vp here Ambassador.

Pence is a disgrace to his Irish immigrant past. #IrishStand https://t.co/iywzDFu7RW

Senator Aodhán Ó Ríordáin tweeted: “No we absolutely don’t welcome the VP here Ambassador. His administration is now internationally renowned for sowing division and spewing hateful xenophobic rhetoric. Pence is a disgrace to his Irish immigrant past.”

Here are more of the replies to the ambassador's tweet:

No Mr Ambassador. We most certainly do not look forward to his visit. His claim of Irishness does a disservice to all of us who live in a modern, progressive democracy, the values of which he decries through his every political action

Also as the US Ambassador *to* Ireland you speak for the US, not Ireland. Stay in your lane.
Perhaps you can begin by explaining why Ireland should welcome a homophobe like Pence? Simply because he's VP?

You sure? Pence is a moron & the United States represents the greatest threat to global peace & security. #YankeeGoHome

Who gave you the right to speak on behalf of Ireland Ambassador? You speak for the USA, that’s literally your job. @DanMulhall speaks for us and does a very fine job. I for one certainly do not look forward to your Vice President’s visit. He’s a bigot.

You’re not speaking for me. As an Irish citizen I would prefer Pence stayed home.

No we don't Ambassador. Ireland might be known as the land of the Cead Míle Fáilte (hundred thousand welcomes) but not on this occasion. You can keep @VP Mike Pence and his homophobic divisive politics on your side of the Atlantic. Thanks ??

As for the vice-president, he has said he is looking forward to traveling to Ireland and celebrating his Irish roots.