US State Department official Derek Chollet was in Belfast this week for meetings with Northern Ireland Secretary Chris Heaton-Harris and all political parties. 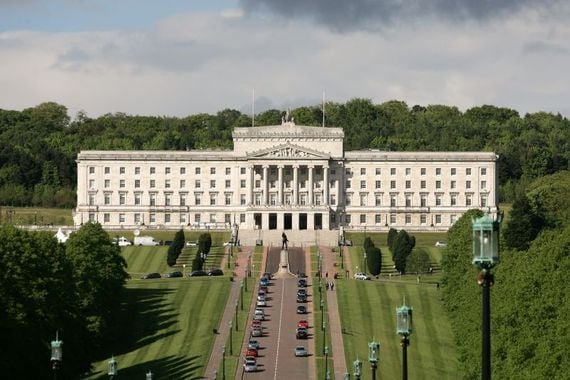 A leading US government official this week joined the international bid to resolve the main issue that’s keeping the Democratic Unionist Party (DUP) out of government in Northern Ireland.

As DUP leader Sir Jeffrey Donaldson defiantly repeated his party will not re-enter power-sharing government until its demands are met on the controversial post-Brexit Protocol, Derek Chollet, a counselor with the US State Department, arrived in Belfast on Monday for meetings with Northern Ireland Secretary Chris Heaton-Harris and all political parties.

Fantastic to meet Secretary of State for @NIOgov Chris Heaton-Harris MP.  We discussed our commitment to Northern Ireland’s stability and prosperity, and I noted my hope the UK and EU will continue constructive negotiations over the implementation of the Northern Ireland Protocol pic.twitter.com/Z7baXB62yQ

The Biden administration advisor flew in from London where he had warned the British government not to take unilateral action on the Northern Ireland Protocol, part of a post-Brexit agreement to ensure a soft trade border in Ireland. It is opposed by unionists because they claim the Irish landline border is replaced by a border in the Irish Sea separating mainland Britain from Northern Ireland.

Thank you @NIAssembly Speaker Alex Maskey MLA & team for hosting me at Stormont. Productive meetings w/political leaders to discuss their priorities & concerns. I reiterated 🇺🇸 commitment to upholding B/GFA and urged them to restore the devolved government ASAP. pic.twitter.com/JKSBeeuSIE

In advance of his arrival in Belfast, Collett cautioned against any “flare-ups” and said the ongoing dispute needs to be resolved. Making a strong call for better relations between the UK and Europe at a time of global instability, Chollet urged all parties to avoid unilateral gestures, including the Northern Ireland Protocol.

He told the British media, “We want to see the temperature go down on this and I think, to everyone's credit, it has in recent weeks.”

Chollet met the Northern Ireland Secretary first and then held a series of private meetings with Sinn Féin, the DUP, Alliance, Ulster Unionists, and SDLP.

Heaton-Harris has already threatened to trigger a fresh Stormont Assembly election if power-sharing is not restored by a deadline of October 28.

But Donaldson vowed to his party’s annual convention last weekend that he will not join a revived power-sharing Executive until Downing Street meets DUP demands on the Protocol.

He later told RTÉ that if checks were removed on goods going from Britain into Northern Ireland, that would be a “quick fix” but would not solve the wider problem.

He said, “Our argument is very clear. That if goods are moving from Great Britain to Northern Ireland and remaining within the UK internal market, they should not be subject to EU regulations.”

Earlier, he told his party conference, “Either the prime minister delivers the provisions of the Protocol bill by legislation or by negotiation and ensures that our place in the United Kingdom is restored…or there will be no basis to re-enter Stormont.

“On this issue, it is not words but actions we need to see and we will judge any outcome on the basis of actions, not words.”

Donaldson’s blunt reiteration of the DUP’s position was a rebuff to Liz Truss. The British prime minister has said the Protocol bill, which would empower her government to unilaterally change parts of the Brexit treaty, is sufficient reason to restore power-sharing.

However, the DUP is waiting for the bill, which is currently at the House of Lords and likely to be delayed for several months there, to become law, and possibly utilized.

With the UK buffeted by financial turmoil and the cost of living crisis, Downing Street has softened its tone on the Protocol in an apparent attempt to cut a deal with the EU and end the damaging quarrel.

If the DUP persists with its opposition, it risks another drubbing by Sinn Féin in a Stormont Assembly election. Sinn Féin became the biggest party in Northern Ireland in an election last May.