Sinn Féin MP John Finucane says that the onus is on the Irish government "to prepare for referendums and reunification" on Irish unity. 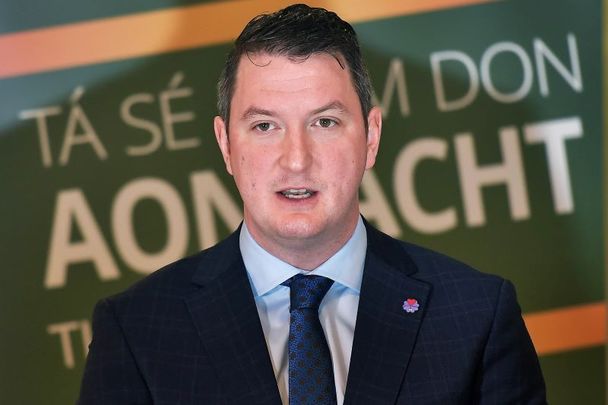 Sinn Féin MP John Finucane has called on the Irish government to start planning for unity by creating a Citizens’ Assembly.

Finucane said his party will begin a “people’s conversation” in October as he welcomed the publication of a LucidTalk poll for the Belfast Telegraph which he felt showed “growing support” for reunification.

The poll revealed that 48 percent of people support Northern Ireland remaining part of the United Kingdom, down one percentage point since the same question was put this time last year. It also showed 41 percent wished to see Northern Ireland unite with the Republic while 11 percent said they were undecided.

Finucane told the Belfast Telegraph: “Yet another poll shows growing support for Irish unity across the island, particularly among young people. The reality is that conversation on the constitutional future of our island is to the fore of political discourse like never before. Planning and preparation must start now.”

He continued: “The Irish government should lead those preparations by immediately establishing a Citizens’ Assembly on Irish unity to help shape the new Ireland.

“Sinn Féin will begin a people’s conversation from October. We want to hear from everybody on their views on the future.

“The onus is on the Irish government to prepare for referendums and reunification without any more delays.”

The poll also revealed 69 percent of respondents from the nationalist and republican community backed Sinn Féin Vice President Michelle O’Neill’s position expressed recently that “violent resistance to British rule during The Troubles” was the only option.

He said on BBC Radio Ulster's Nolan Show: “It is extremely chilling to think that seven in 10 of nationalist people that you rub shoulders with day to day actually support the butchery that the IRA delivered."

Separately, Ireland’s Europe Minister Thomas Byrne said on Sunday that he hopes Liz Truss will set a “good” pattern and “be her own person” when dealing with Brexit issues if she replaces Boris Johnson as next UK prime minister. Truss is hot favorite to win the leadership battle as several polls have indicated she is well ahead of rival Rishi Sunak.

Although Truss sided with Johnson in the British government plan to overturn the protocol designed to maintain a soft border, Byrne told Newstalk Radio, “I actually don’t think the door for reset is closed.”

Last week, Truss underlined her Brexit Protocol stance when she told a Belfast hustings that she would not accept any compromises on a renegotiated Protocol as prime minister if it meant key UK demands were not met.

But Byrne expressed hope when he said, “Prime ministers, when they take office, naturally take on their own vision of where the job lands.

“I suspect she will set a pattern. And I’d be hopeful that, overall, that pattern will be good, because what the Tories are doing at the moment is not winning them electoral success, despite the fact that it appeals to a certain base. But it doesn’t appeal to the broad mass of the British public.”