Michelle O'Neill says there was "no alternative" to IRA violence during the Troubles, but says that now, the Good Friday Agreement provides an alternative to conflict. 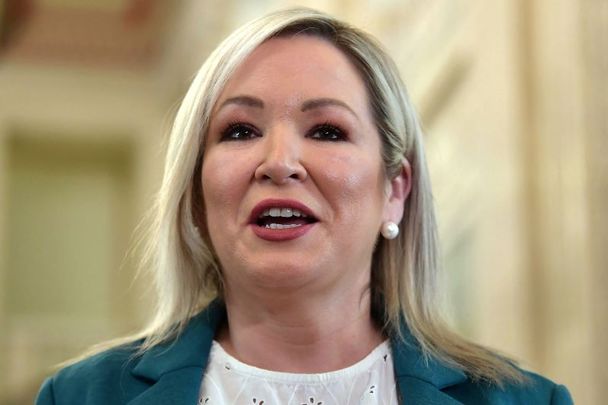 Michelle O’Neill, the Vice President of Sinn Féin and the First Minister-designate of Northern Ireland, is facing criticism after she shared her views about Irish Republican Army (IRA) violence during the Troubles.

O’Neill, whose father Brendan Doris was a Provisional IRA prisoner and a Sinn Féin councillor and whose two cousins were in the IRA, made the comments during a nearly half-hour interview with Mark Carruthers for the Red Lines podcast.

Carruthers, who noted that O'Neill has been outspoken against violence, asked if she felt that "it was right at that time for members of your family and others to engage in violent resistance to British rule here?”

She replied: "I think at the time there was no alternative. But now, thankfully, we have an alternative to conflict and that is the Good Friday Agreement and that’s why it’s so precious to us all."

O'Neill said that she's been active in politics in a full-time manner since 1998, the year the Good Friday Agreement was signed.

"My whole adult life has been about building the peace process," she said.

"I wish the conditions were never here that actually led to conflict. I wish that so many people didn’t have the horrible experience that they’ve had throughout the conflict days, that’s everyone's experience.

“I think the only way we're ever going to build a better future is actually to understand that it's okay to have a different take on the past.

"My narrative is a very different one to someone who's perhaps lost a loved one at the hands of republicans.

"I think that we need to be mature enough to be able to say, ‘well that’s okay, we’ll have to agree to differ on that one, but let’s make sure that the conditions never exist again that we find ourselves in that scenario.’

“Not that I believe that we would, but I just think it’s important.

You can listen to the Michelle O'Neill interview on BBC Radio Ulster's Red Lines podcast here:

Since the podcast, O'Neill has faced some criticism for her notion that there was "no alternative" to violence.

"I am not surprised at what she said, but it is very sickening," Colin Worton, whose brother Kenneth Worton was amongst the 10 Protestants killed by the IRA near Kingsmill, Co Armagh in 1976, said on BBC Radio Ulster on Wednesday.

Naomi Long, head of the Alliance Party, said "We all have our own perspectives, but we aren't entitled to our own truth."

She added: “Thousands of people, including a majority of nationalists, who did not pursue violence to achieve their political aims, are testament to that. Indeed, one could argue the use of violence delayed the reaching of political accommodation until 1998, and its devastating impacts are still felt personally and politically to this day."

We all have our own perspectives, but we aren't entitled to our own truth. Throughout the 70s, 80s and 90s, @allianceparty and others were working to reach democratic solutions, which were hampered by violence. There was most definitely an alternative; many thousands chose it. https://t.co/Dop9SlAOJM

Colum Eastwood, head of the Social Democratic and Labour Party (SDLP), pointed to his party's founder John Hume and said "there was an alternative to IRA violence."

There was an alternative to IRA violence. John Hume led that alternative & the Nationalist people backed it. The IRA murdered 1000s of its own people, destroyed businesses, ruined young people's lives by selling them a twisted ideology & put the cause of Irish unity back decades.

Sir Jeffrey Donaldson, head of the Democratic Unionist Party (DUP), said: "Michelle O’Neill’s comments do not fit with support for the rule of law. Murder is never justified."

A 'First Minister for everyone' does not justify murder
"Michelle O’Neill’s comments do not fit with support for the rule of law. Murder is never justified."@J_Donaldson_MP https://t.co/OyBrz0ete1 via @duponline

Doug Beattie, head of the Ulster Unionist Party (UUP), said: "The alternative to violence is dialogue and democracy. John Hume, Seamus Mallon and Joe Hendron understood that. That alternative path existed in the 1970s, but it wasn`t enough for the IRA Godfathers. Michelle O'Neill is entitled to her opinion, but she is not entitled to alternative facts."

Jim Allister, head of the Traditional Unionist Voice (TUV) party, said that O'Neill's comments are "a timely reminder to the DUP of why they should not enthrone her as First Minister."