Nearly three months after its Assembly elections, Northern Ireland still hasn’t its own internal government, but it now has an official opposition formed by the SDLP. 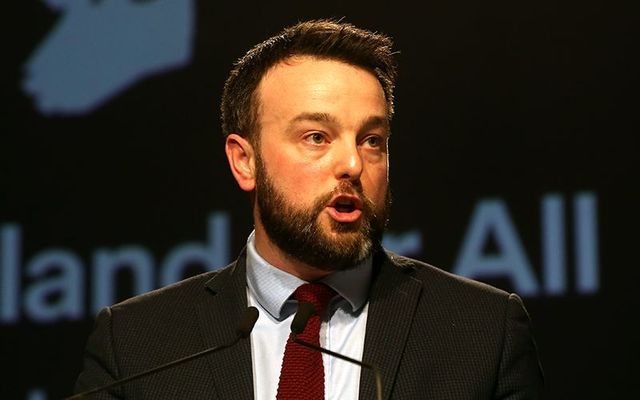 Colum Eastwood, head of the SDLP in Northern Ireland, pictured here in Dublin in 2019. RollingNews

The Social Democratic and Labour Party (SDLP) this week said it was forming a Stormont opposition and invited the Alliance and Ulster Unionist parties to join it.

What effect an opposition will have is questionable as no Executive has yet been formed because the Democratic Unionist Party (DUP) still refuses to join Sinn Féin in government.

But the SDLP intends to establish a working opposition on the basis that it can urge stand-in ministers who were in place before power-sharing collapsed after the May election to unlock millions of pounds of public money in Stormont bank accounts.

The so-called stand-in ministers were already in office under the last administration and remain in charge of their departments while the Northern Ireland government remains unformed.

South Belfast Assembly Member Matthew O’Toole has been named by the SDLP as leader of the opposition.

He said: “Those who have held the democratic institutions of the Good Friday Agreement to ransom cannot be allowed to inflict further pain on our communities while they play cynical power games in London.

“It’s long past time that ministers collecting their wages, showed us exactly what the public are paying for. The pretense of governing, while delivering nothing for people and communities, must end.”

Today @SDLPlive formally designates as an official opposition. We want to provide constructive, serious opposition to the dysfunction and division at Stormont.

We've recognised the outcome of the election, and want to get on with our job - time for others to do the same. pic.twitter.com/T40TIpRvTX

Under Northern Ireland’s complicated representation system, there are ministers from nationalist, unionist and non-aligned parties depending on how many seats they won in an election.

Sinn Féin and the DUP won most seats in the most recent election, but DUP leader Sir Jeffrey Donaldson has refused to share governing partnership with Sinn Féin, pending resolution at Westminster of a disputed Protocol established to ensure a safe trade border in Ireland after Brexit.

Following a successful petition tabled by the SDLP, the Northern Ireland Assembly was set to be recalled this week, but that has been postponed to August 3 in the wake of David Trimble's death on Monday.

An attempt will be made for the third time since May’s election to elect a new speaker. But the DUP confirmed it would continue to block the election of a speaker – and thus continue the power-sharing stalemate – until the Northern Ireland Protocol issue is resolved.

The Protocol Bill has passed its third reading in the House of Commons and it now goes to the House of Lords where a delay of up to a year is anticipated by political observers.