Sinn Féin's Michelle O'Neill is in Washington D.C. this week for a series of meetings to discuss the importance of restoring the power-sharing government at Stormont. 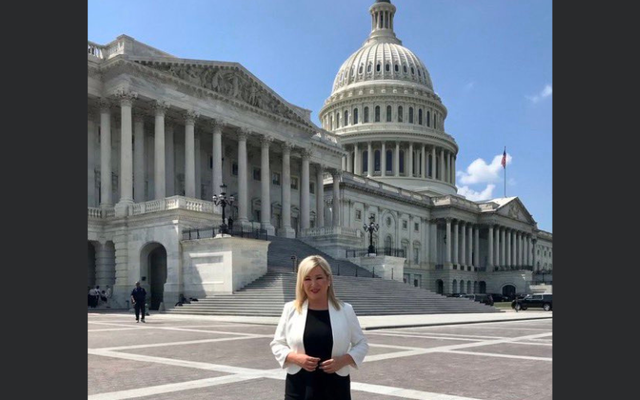 Sinn Féin's Vice President is in the USA this week to meet with members of Congress and the Biden administration to discuss Northern Irish politics.

Michelle O'Neill, Vice President of Sinn Féin and the North’s First Minister in waiting, is in Washington, D.C. this week for a series of meetings with members of Congress and Biden administration officials to impress upon them the importance of restoring the power-sharing government at Stormont, which has been stalled since May’s election because unionists won’t take their seats due to their anger over the Brexit Protocol.

Sinn Féin became the North’s largest party after the election, but unionists refuse to form a government. O’Neill will impress upon U.S. politicians that voters asked for change.

“I will tell politicians, diplomats and business leaders that the majority of people voted for change, and there is a strong commitment from a majority of newly elected MLAs and Assembly parties to work together and make politics work so we can deliver for the whole community,” O’Neill said in a statement.

“The continued stand-off by the (Democratic Unionist Party) who are denying the public the democratic representation and leadership they are entitled to cannot continue.  “It is important that all those in the U.S. who value the close political, economic and cultural bonds with the island of Ireland understand what is now at stake after a quarter-century of peace and stability.

“It is vital that we underscore the reckless actions of the British government who are trying to sabotage our political agreements through their anti-Good Friday Agreement agenda which is disingenuously dressed up in a pro-agreement rhetoric.”

On Monday, O’Neill met with Connecticut Senator Chris Murphy, who tweeted about the meeting.  “Great to see you, Michelle. I’m watching the Conservative Party election carefully to make sure the next PM places a priority on preserving the Good Friday Agreement. Too often PM Johnson put politics ahead of Northern Ireland peace,” he wrote.

O’Neill also met with Derek Chollet, counselor at the State Department.  “Enjoyed meeting (Michelle O’Neill) and discussing our commitment to the Good Friday Agreement. The people of Northern Ireland are best served by a functioning power-sharing government,” Chollet tweeted.

Enjoyed meeting @moneillsf and discussing our commitment to the Good Friday Agreement. The people of Northern Ireland are best served by a functioning power-sharing government. pic.twitter.com/xLEUbw3CpN