David Trimble, Northern Ireland's first First Minister and a 1998 recipient of the Nobel Peace Prize, died on Monday, July 25, his family has confirmed. 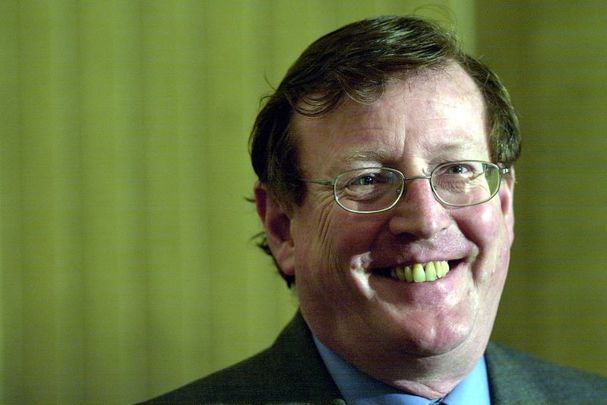 November 5, 2001: David Trimble, leader of the Ulster Unionist Party, speaking at Stormont Buildings after the Democratic Unionist Party had delayed the elections of the new first and deputy ministers for the Northern Ireland executive by Procedural means RollingNews.ie

David Trimble, one of the architects of the Good Friday Agreement and the first person to be elected as First Minister of Northern, has died at 77 years old.

Trimble's family confirmed his passing in a statement via the Ulster Unionist Party (UUP) on Monday, July 25: “It is with great sadness that the family of Lord Trimble announce that he passed away peacefully earlier today following a short illness.”

Trimble is survived by his wife Daphne and children Richard, Victoria, Nicholas, and Sarah.

“David Trimble was a man of courage & vision. He chose to grasp the opportunity for peace when it presented itself & sought to end the decades of violence that blighted his beloved Northern Ireland.” - UUP Leader Doug Beattie MC MLA

Co Down native Trimble played a key role in the talks that lead to the Good Friday/Belfast Agreement. In 1998, he won a Nobel Peace Prize alongside John Hume for his contributions to the peace process. 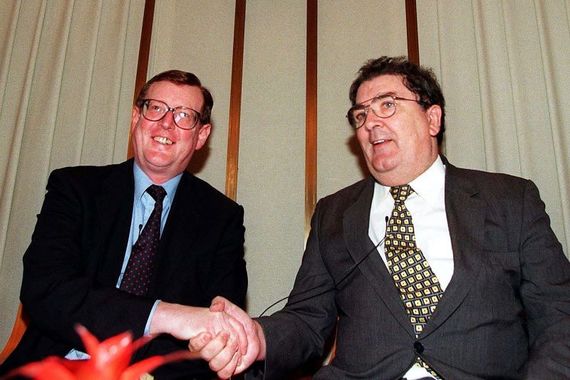 December 9, 1998: David Trimble (L) and John Hume (R) during a press conference in the Norwegian Nobel Institute in Oslo. (RollingNews.ie)

Trimble made his final public appearance just a few weeks ago when his portrait was unveiled at Queen's University Belfast during the Inaugural Annual Professor Lord David Trimble lecture.

At the event, he reflected on 25 years since the peace accords: “The Good Friday Agreement is something which everybody in Northern Ireland has been able to agree with, it doesn’t mean they agree with everything, there are aspects which some people thought were a mistake, but the basic thing is that this was agreed.

“That is there. People are actually not throwing the agreement to pieces, their complaints are still based on the existence of the agreement.

“They are not saying ‘throw it out’, so that’s the thing to bear in mind.”

A special evening at @QUBRiddelHall to recognise the huge contribution Lord David Trimble has made to our society, including the unveiling of a striking portrait by renowned artist @colin_davidson pic.twitter.com/3Whd5BLmQu

On Monday, politicians across the political spectrum began paying tribute to Trimble.

Doug Beattie, the head of the Ulster Unionist Party, which Trimble led from 1995 to 2005, said in a statement: "Trimble was a man of courage and vision. He chose to grasp the opportunity for peace when it presented itself and sought to end the decades of violence that blighted his beloved Northern Ireland."

#LordTrimble - A political giant, a courageous politician, a staunch unionist and a friend. pic.twitter.com/RTVWUAWExe

Michelle O’Neill, the Vice President of Sinn Féin and the First Minister-elect of Northern Ireland, said: "His very significant contribution to the peace process and his courage in helping achieve the Good Friday Agreement leaves a legacy a quarter century on for which he and his family should be rightly proud."

2/2
His very significant contribution to the peace process and his courage in helping achieve the Good Friday Agreement leaves a legacy a quarter century on for which he and his family should be rightly proud.

Mary Lou McDonald, the President of Sinn Féin, said Trimble's "contribution to building the peace process in Ireland will stand as a proud and living legacy of his political life."

Very saddened to hear of the death of David Trimble. His contribution to building the peace process in Ireland will stand as a proud and living legacy of his political life. Condolences to his wife Daphne and family. Ar dheis De go raibh a anam.

Sir Jeffrey Donaldson, head of the Democratic Unionist Party (DUP), said that Trimble "leaves a huge and lasting legacy to Northern Ireland. He can undoubtedly be said to have shaped history in our country.”

Colum Eastwood, head of the Social Democratic and Labour Party (SDLP), said "He doesn’t often get enough credit but without his political bravery and the risks he took, there would have been no agreement."

Eastwood went on to note: "We are currently engaging with Assembly authorities and other parties to postpone tomorrow’s recall motion as a mark of respect to David Trimble and his family. Whatever our political disagreements in this moment, this is a time to come together.

David Trimble was one of the most consequential political leaders of the last century whose life left an indelible mark on our shared island’s story.

He doesn’t often get enough credit but without his political bravery and the risks he took, there would have been no agreement.

Taoiseach Micheál Martin said in a statement: "The work of reconciliation begun in the Good Friday Agreement continues, and as new generations pick up the mantle of this work, it is fitting that we pay tribute to Lord Trimble for his central contribution in setting us on the path to peace and reconciliation."

Deeply saddened at the passing of David Trimble, someone who played a crucial and courageous role in bringing peace to Northern Ireland.

My sympathies and condolences to all of his family, friends and colleagues.

President of Ireland Michael D. Higgins said: "David Trimble’s dedication and courage, often during the most challenging times, has earned him a distinguished and deserved place in our history books. His work leaves a true legacy on the necessity and value of peace on our shared island for future generations."

Statement by President Higgins on the death of Lord David Trimblehttps://t.co/wdMZ9XZemw pic.twitter.com/T26WcZPtzf