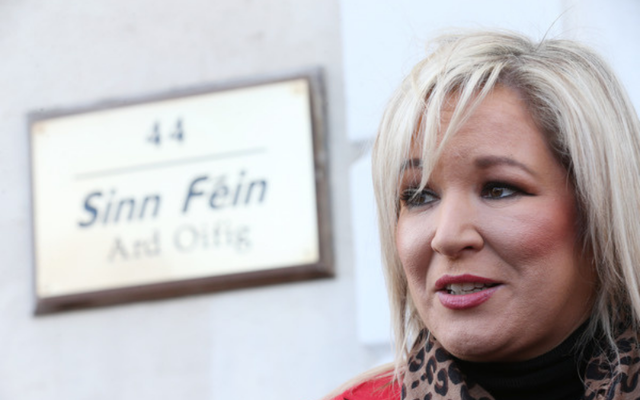 Sinn Féin Vice President Michelle O'Neill has faced criticism for attending an event at a Tyrone GAA club in memory of three former players who were members of the IRA.

Clonoe O'Rahilly's GAC erected a plaque in memory of Peter Clancy, Hugh Gerard Coney, and Brian Campbell, three IRA members who were shot and killed by British soldiers during the Troubles.

On February 19, O'Neill attended the unveiling of the memorial plaque which says: "In proud memory of our fallen Gaels. Never Forgotten".

East Tyrone Ógra Shinn Féin, a youth-wing of Sinn Féin, tweeted photographs of the event, stating that the plaque paid tribute to three men who died "on active service in the struggle for freedom".

Today the Clonoe O'Rahilly's erected a monument dedicated to their club members Óglach Peter Clancy, Óglach Hugh Gerard Coney and Óglach Brian Campbell who lost their lives while on Active Service in the struggle for Freedom. We stand with their families today and everyday! pic.twitter.com/7iXI9up7Q4

Paddy Campbell, 21, was shot dead by the SAS on the grounds of St. Patrick's Church in Clonoe along with three others in February 1992 shortly after they had taken part in a gun attack on an RUC station in Coalisland.

Hugh Gerard Coney, 24, was shot in the back by a British soldier as he tried to escape from Long Kesh in 1974, while Brian Campbell, 19, was shot dead by the SAS in a field near Clonoe in 1983.

Victims group Innocent Victims United questioned whether O'Neill could serve as First Minister of Northern Ireland following the Assembly elections in May, after which Sinn Féin is expected to be the largest party in Stormont.

"The presence of Michelle O’Neill at the unveiling of this memorial will also again raise the question for many; how could she ever perform the role of First Minister – Northern Ireland’s symbolic head of state?" said Innocent Victims United spokesperson Kenny Donaldson.

Donaldson said events such as those held at Clonoe O'Rahilly's over the weekend do not help to challenge unionist perceptions about the GAA in Northern Ireland.

"We try to encourage the broad Protestant and unionist community to look at GAA in its widest context and what it means for many people participating, ie sport and identity.

"However, events like this don’t help in challenging perceptions. Once again sport and politics has become entangled, what message is being sent out to today’s generation?"

Sinn Féin said in a statement to the Irish News that all communities had a "right to remember their dead" under the terms of the Good Friday agreement.

"Under the Good Friday Agreement, everyone has the right to remember their dead with dignity and respect," a spokesperson said.

The GAA has also issued a statement responding to the matter: “The GAA has become aware of a commemoration which took place recently in the Clonoe O’Rahilly’s club in Tyrone, in memory of three of its former club members.

“We respect the right of any unit of the Association to remember its dead members but in so doing it is important to recognise the need for sensitivity in such matters.

“The Association will work on issuing guidance to clubs and counties on such events in the future.”