The Vice President of the European Commission said the intended proposals on the Northern Ireland Protocol would be "simple but far-reaching." 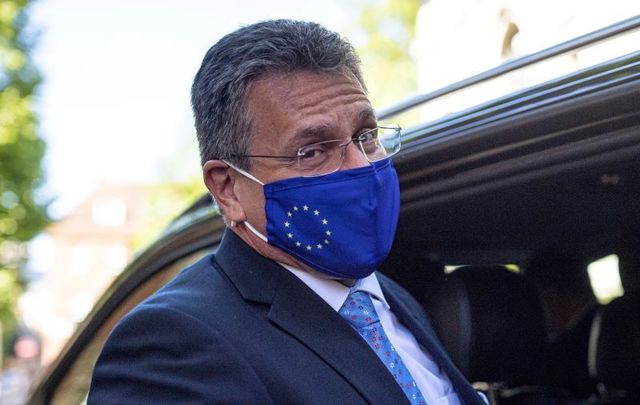 June 9, 2021: Vice President of the European Commission for Interinstitutional Relations Maroš Šefčovič departs from Europe House after giving a press conference in London, England. The United Kingdom is at odds with the European Union over enforcement of provisions in the Northern Ireland protocol that governs post-Brexit trade. Getty Images

The EU is set to table new "far-reaching" proposals on the Northern Ireland Protocol in a bid to kickstart favorable talks with the United Kingdom.

European Commission Vice President Maros Šefčovič told a virtual conference in Dublin on Thursday that the proposals will be in place by the middle of next week, with intensive talks set to talk place at the end of October and throughout November.

Šefčovič described the proposals as simple but far-reaching and added that he hoped that they would be received as such by the UK.

"It’s a very simple proposal but from our perspective, these would be really, I would say, very far-reaching proposals," Šefčovič told the virtual conference at the Irish Institute of European Affairs (IIEA).

"I sincerely hope that it will be seen as such by our UK counterparts and they engage constructively in our discussion because I think we have to move from the tough political rhetoric, from the threats we hear all the time, down to the business that actually solves the problems."

He said that the proposals involved animal checks, customs, medicine supplies, and providing a voice for Northern Irish representatives in the EU.

Šefčovič said that the EU wants r to demonstrate to the people of Northern Ireland that it is doing everything in its power to solve the issues of the Protocol.

He added that the Protocol was the "only solution" to the question of Northern Ireland.

"The protocol is not the problem. On the contrary, it is the only solution we have.

"Failing to apply it will not make problems disappear, but simply take away the tools to solve them."

He said that it was in the best interests of the UK and the EU to find a working solution to the Northern Ireland Protocol by the end of the year or by early next year.

You can watch the IIEA's panel with Maroš Šefčovič on The Implementation of the Protocol on Ireland / Northern Ireland, first aired on October 7, here:

However, unionists argue that the Protocol has created a trade border between Northern Ireland and Great Britain down the Irish Sea and state that the is threatens Northern Ireland's constitutional position as part of the United Kingdom.

Sir Jeffrey Donaldson, leader of Northern Ireland's Democratic Unionist Party (DUP), claimed that unionist pressure had brought the EU to the negotiation table over the Protocol.

"We were told weeks ago the EU were not in a position they were ever going to reopen negotiations. I think we have breached the first wall," Donaldson told BBC's Talkback program.

"I think the pressure we have brought to bear...has focused minds both in London and in Brussels."

Opposition to the Northern Ireland Protocol amongst unionists and Boris Johnson's Conservative Party had raised concerns that the British Government would trigger Article 16 of the Protocol, which allows either the EU or the UK to take unilateral action if the legislation is causing "serious economic, societal or environmental difficulties that are liable to persist".

British Brexit negotiator David Frost publicly mooted the option at the Conservative Party conference earlier this week, while Šefčovič said that such threats were not helping.