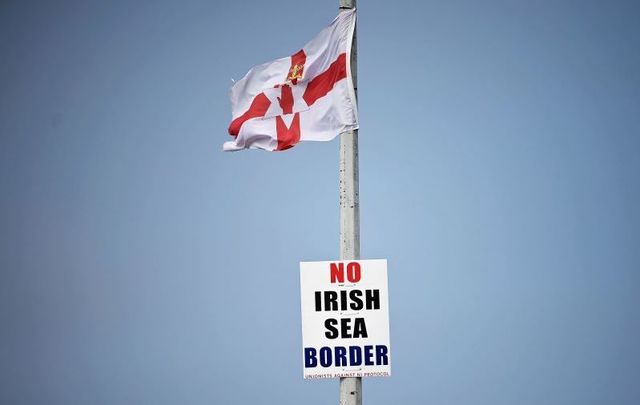 September 7, 2021: Anti-Irish sea border posters at the entrance to Larne harbour, one of the main entry points between Northern Ireland and the rest of the United Kingdom. Getty Images

Four Unionist leaders in Northern Ireland have signed their names to a joint declaration to "affirm our opposition to the Northern Ireland Protocol, its mechanisms and structures and reaffirm our unalterable position that the Protocol must be rejected and replaced by arrangements which fully respect Northern Ireland’s position as a constituent and integral part of the United Kingdom”.

An explanatory note about Tuesday's joint declaration says in part: "The Northern Ireland Protocol fundamentally alters the arrangements within the Belfast Agreement by making Northern Ireland subject to European Union laws and processes of a Single Market for goods, under a European Union customs code and VAT regime, with the rest of our nation decreed a 'third country' when it comes to trade and the import of goods."

It adds: “Through the Northern Ireland Protocol, the European Union asserts sovereignty over economic and trading matters in Northern Ireland, subjecting us to their laws - which we cannot change - and the rule of the European Court of Justice without local political representation, creating a major democratic deficit.

“Thus, going forward, any agreement which fails to ensure a proportionate and equitable solution which respects the sovereignty of the United Kingdom and restores our unfettered place within the Internal Market, cannot command the support of the unionist community.”

The Northern Ireland Protocol, a portion of the agreed-upon Brexit arrangement, aims to keep Northern Ireland in both the United Kingdom's customs territory and the EU's single market. It effectively creates a border in the Irish Sea, much to the anger of unionists.

The tension surrounding the Northern Ireland Protocol has also garnered attention from high-level US politicians, who have warned that if the Good Friday Agreement is threatened, it could have implications on a new US-UK trade deal.