The August 15 bonfire in Meenan Square in Derry, Northern Ireland is being condemned by politicians while also being investigated by the PSNI for hate crimes. 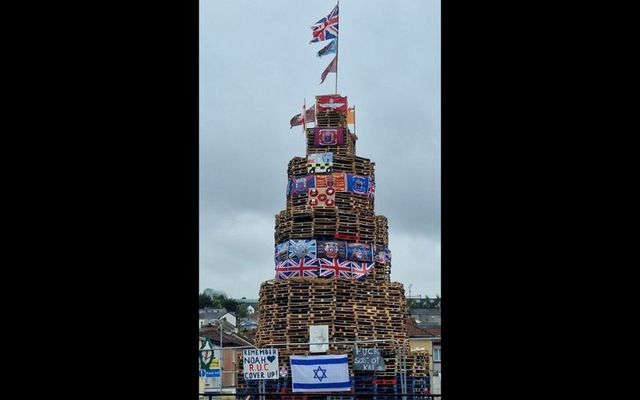 A bonfire in a nationalist area of Derry on August 15 that featured a poster of Queen Elizabeth, remembrance poppies, and UK flags has been met with condemnation.

The Police Service of Northern Ireland (PSNI) has confirmed that the bonfire at Meenan Square in Derry on Monday, August 15, is being investigated for hate crimes.

Derry City & Strabane Superintendent Willy Calderwood said on Tuesday: “We’ve received a number of reports in relation to material placed on a bonfire in Meenan Square in the Bogside area of Derry / Londonderry.

“These reports are being treated as hate crimes and we are seeking to identify those responsible.

“As part of our enquiries, we have gathered and secured evidence of potential offending and we will engage with the Public Prosecution Service who will ultimately have responsibility for decisions in relation to prosecution.

“The vast majority of people celebrate their culture peacefully and lawfully, and do not want cultural celebrations to be undermined by anti-social behaviour, criminal activity or hate directed towards others.

“I’m appealing for anyone with any further information, but specifically information on those who may have been responsible for the potential offences, to provide it to us to bring those responsible to justice.”

Bonfires on August 15 are traditional in some nationalist parts of Northern Ireland to mark the Catholic Feast of the Assumption, The Belfast Telegraph reports. Others light the bonfires to commemorate the introduction of internment without trial of republican suspects, which was introduced by the government in 1971.

Politicians in Northern Ireland have expressed their condemnation of Monday's night bonfire in Derry, which came about a month after a July 12 bonfire in Co Antrim featured effigies of politicians. Last year, a similar bonfire in Derry was also condemned for displaying the name of PSNI Constable Ronan Kerr, who was murdered in 2011.

“These displays of hate are not representative of the people of this city," Sandra Duffy, the Mayor of Derry and Strabane and a Sinn Féin Councillor, said on Tuesday. “Events of recent days in the city have been a setback after what has been a hugely positive summer for both Derry and Strabane."

Colum Eastwood, head of the SDLP, said the bonfire was "totally out of order." He added: "If you actually want to achieve something get your head in gear and learn that we have to share this place. There is no other way."

This is totally out of order. Why do they need to mimic the worst elements of loyalist culture? https://t.co/EQxjkVho4I

Jim Allister, the founder of the Traditional Unionist Voice (TUV) party, said his party was an "object of unbridled republican hate." A TUV poster was hung on the bonfire.

TUV in good company as object of unbridled republican hate. Noticeable how the mercury of hate has risen since Michelle O’Neill brazenly endorsed and justified the Provo murder campaign. pic.twitter.com/MYzny3cz1P

Doug Beattie, head of the Ulster Unionist Party, said "this can never be right."

And so it continues…… complaints about bonfires in July from some quarters, silence in August from the same quarters.

Sir Jeffrey Donaldson, head of the Democratic Unionist Party (DUP), said it was an "offensive display of hate."

This is outrageous & offensive display of hate. It should be universally rejected. When this generation is told there was no alternative to violence, this is the result. Time Michelle O’Neill gave leadership & opposed this hatred. There was always an alternative to killing people https://t.co/5NSQxHVbfS

The last few months have been an exhausting spectacle of hatred, bigotry and of poking each other in the eye.

Whether you aspire to a united Ireland or remaining in the United Kingdom, building a united community is fundamental to a better future.

This is not how to build it. https://t.co/d2Ooc6IyZY

In Ireland, Minister for Foreign Affairs Simon Coveney said "this kind of hatred is so far from the future we should be trying to build."

Whether in July or August, this kind of hatred is so far from the future we should be trying to build.
To all volunteers, community workers, youth orgs. & others working for reconciliation & respect, this is an insult to your efforts. We will work harder with you for peace! https://t.co/jgiqsaPKn6