Some of the bonfires that were ignited across Northern Ireland for the Eleventh Night displayed shockingly bigoted messages aimed at Catholics and politicians. 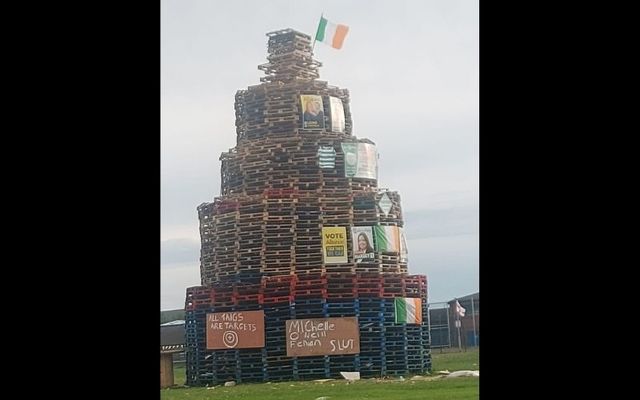 This photo of the bonfire in Cregagh was widely circulated on social media between July 11 and July 12.

Hundreds of bonfires were burned in Northern Ireland last night, July 11, in the lead-up to the loyalist communities' celebration of the Twelfth of July.

More than 250 bonfires were constructed in loyalist neighborhoods across Northern Ireland for the Eleventh Night, according to RTÉ. The bonfires are traditionally ignited on the eve of the Twelfth of July, a day when members of Protestant loyal orders parade in Northern Ireland to commemorate the Battle of Boyne.

In the hours leading up to the bonfires being lit, the Police Service of Northern Ireland (PSNI) said it had received a number of complaints relating to flags, effigies, election posters, and other emblems being placed on bonfires.

"We are gathering evidence in respect of these complaints and will review to establish whether offences have been committed," the PSNI said.

The Police Service has received a number of complaints relating to flags, effigies, election posters and other emblems being placed on bonfires. We are gathering evidence in respect of these complaints and will review to establish whether offences have been committed. pic.twitter.com/3AJLnQLm7L

As the PSNI confirmed it was gathering evidence, politicians from several parties took to social media to hit out at the sectarian nature of some of the bonfires.

One of perhaps the most shocking bonfires was erected in Cregagh in Co Down that featured not only election posters and Irish flags, but a sign saying "Michelle O'Neill fenian slut" and another sign saying "All taigs are targets."

(Michelle O'Neill, the vice president of Sinn Féin, is the First Minister-elect for Northern Ireland. "Taigs" is a derogatory term used for Irish Catholics.)

Tonight I know there will be many people, including my friends and family who will enjoy the 11th night safely. I hope they have a good night.

We are all let down however by heinous threats like this in the Cregagh - an area I represent and work with residents in every week. pic.twitter.com/4637gnz1Eb

Belfast City Councillor Michael Long of the Alliance party also said the Cregagh bonfire was "nothing but pure sectarian hatred."

Elsewhere, SDLP representative for West Belfast Paul Doherty said it was "extremely disappointing" to see his election posters on a bonfire.

"Leaders in the unionist community need to call these actions out and put a stop to this once and for all," he wrote.

It’s extremely disappointing to see my election posters alongside this sectarian message on an eleventh night bonfire. Leaders in the unionist community need to call these actions out and put a stop to this once and for all. pic.twitter.com/82zN5LQYHx

East Derry SDLP MLA Cara Hunter shared another picture of a bonfire with election posters saying "It’s about time leaders from the unionist community stepped up and called this out for what it is - blatant sectarianism."

The normalisation of these types of bonfires is a sad reflection of where we are today.

It’s about time leaders from the unionist community stepped up and called this out for what it is - blatant sectarianism. It needs to stop. pic.twitter.com/ViUiAzDWNX

Sinn Féin Councillor for Lisburn and Castlereagh Gary McCleave said his children came across a picture of a bonfire that featured his election poster on social media.

"This is not culture, it is a hate crime," McCleave wrote.

Tonight I am having to answer questions from my children who came across this on social media why their Daddy is on a bonfire to be burnt.

This is not culture, it is a hate crime. Those within political unionism need to show leadership & stand up against this sectarian hatred pic.twitter.com/SmYsgu0Wpr

This bonfire in Ballymena is not a celebration of culture. It is a hate crime. pic.twitter.com/dcZOnEFSvg

Gerry Carroll, a People Before Profit MLA for West Belfast, said that it was "incredibly disappointing and saddening" to see his other political representatives' election posters being burned.

"We would appeal to those who are plagued with sectarian imagery and political posters hoisted for burning, to reject such provocations and join the fightback against sectarianism," he wrote.