The Craigyhill Bonfire in Larne, Co Antrim reached just over 202 ft on July 11, eclipsing the previous world record of 198 ft set in Austria in March 2019. 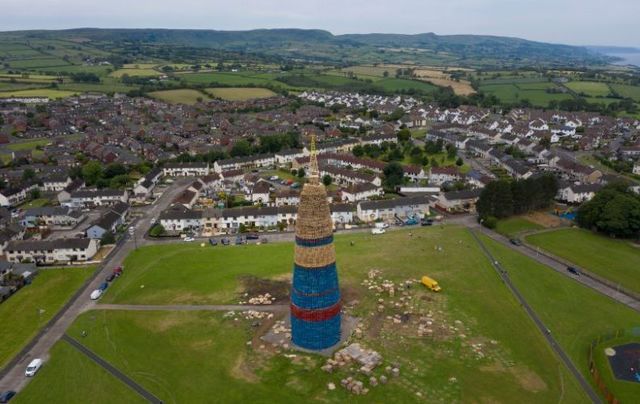 July 11, 2022: The completed Loyalist bonfire which is claiming a new world record in Larne, Northern Ireland. According to the official Guinness World Records, the record for the tallest structure stands at 198 feet and 11 inches, the Craigyhill bonfire has been measured at a height of 202.37208 ft by an independent land survey company. Getty Images

A loyalist community in Co Antrim claims to have broken the record for the world's largest bonfire ahead of the Eleventh Night celebrations in Northern Ireland.

The Craigyhill Bonfire in Larne, Co Antrim reached a height of 202.3 feet on July 11, apparently eclipsing the current Guinness World Record of 198 ft 11 in which was set in Austria in 2019.

Organizers will reportedly submit the bonfire's height to the Guinness World Records for consideration.

The organizers said in a social media post on Monday: "So the land survey firm has been down the last few hours measuring with lasers and a drone, taking measurements from 3 separate areas around the green of the bonfire and it was just confirmed there 15 mins ago the height is 202.37208 feet."

So the land survey firm has been down the last few hours measuring with lasers and a drone , taking measurements from 3...

In a later update, however, organizers said: "The committee felt it was the right decision to remove the pyre (top part of the bonfire) this was due to the wind picking up and we felt the pyre needed taken down with a controlled drop which was pre planned due once the record had been broken with safety concerns we went ahead and carried out the controlled drop in a safe manor [sic]."

James Brown, from the Craigyhill Bonfire Committee, said it had taken roughly two months to build the massive bonfire.

"We thought Northern Ireland is the home of bonfires, so why isn’t that record here. So we decided to go for it, to try our best to set a new record," Brown told the PA news agency.

"We fundraised for nearly 10 months, and then spent two months building it."

He added: “If you’ve seen it, you’ll see all the blue and red pallets. They are a stronger pallet, and take a lot more weight and pressure. That was key for us, to be safe and get the height.”

The bonfire in Larne has been dedicated to John Steele, who fell to his death while building the nearby Antiville bonfire on July 9.

The Antiville bonfire was dismantled on Sunday out of respect, but Brown revealed that Steele's family asked him to "push for the record" in honor of Steele's memory.

"Talking to the family, they wanted us to push on for the record in John’s memory so that gave us the determination to go ahead and smash the record for John – and that’s what we have done," Brown said.

Loyalist communities in Northern Ireland typically light bonfires on July 11 ahead of their Twelfth of July celebrations, which mark King William of Orange's victory over the Catholic King James II at the Battle of the Boyne in 1690.

Some bonfires have been criticized in recent years for their promotion of sectarian abuse and hate speech.