The man, who was believed to be aged in his mid-30s, was pronounced dead at the scene after falling from the 50-foot bonfire in the Antiville estate in Larne, County Antrim, at around 9:30 p.m. on Saturday. 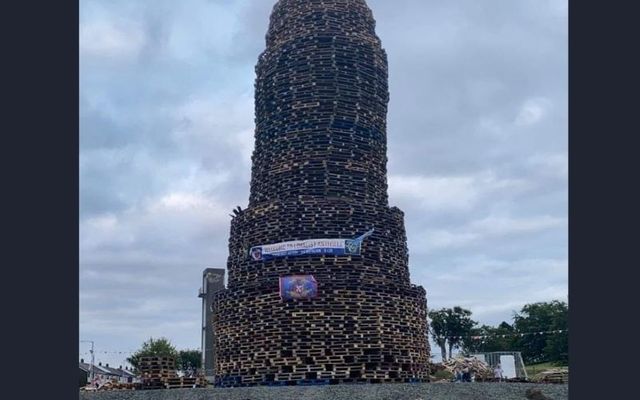 The 2021 bonfire in the Antiville estate. Antiville Bonfire Fundraising Facebook

A man has died after falling from a loyalist bonfire in Northern Ireland, the PSNI has confirmed.

The man, who was believed to be aged in his mid-30s, was pronounced dead at the scene after falling from the 50-foot bonfire in the Antiville estate in Larne, County Antrim, at around 9:30 p.m. on Saturday.

The bonfire is one of many being constructed ahead of the loyalist community's traditional "Eleventh Night" celebrations, which usher in the main date in the Protestant loyal order's parading season - the Twelfth of July.

The Antiville bonfire was near completion at the time of the accident, the Irish Times reports.

DUP MP Sammy Wilson attended the scene on Saturday night and said the local community is in shock, describing the accident as a "real tragedy".

"My thoughts and sympathy are with this man’s family," Wilson said.

"It is a real tragedy at what is a special time of year for people in the loyalist community. The family are well-known in the area, and I am sure this will be greatly felt within the community."

Wilson revealed that the bonfire will now be removed from the Antiville estate.

PSNI Inspector Adrian Bryan called on witnesses to come forward and said his thoughts were with the man's family.

"We understand that the man was assisting in the building of the bonfire when this tragic accident occurred. Our thoughts are very much with his family at this time," Bryan said.

The Antiville bonfire was not the only bonfire under construction in Larne ahead of Eleventh Night.

Bonfire builders in the nearby Craigyhill estate are attempting to break the world record for the tallest bonfire, which currently stands at 198 feet, and have confirmed that they will continue with construction to pay tribute to the man's memory.

Every July 12, Protestants in Northern Ireland celebrate King William of Orange's victory over King James II at the Battle of the Boyne in 1690.