BBC's decision to not resume live television coverage of Belfast's Twelfth of July demonstration has been met with "immense disappointment" by the Grand Orange Lodge of Ireland. 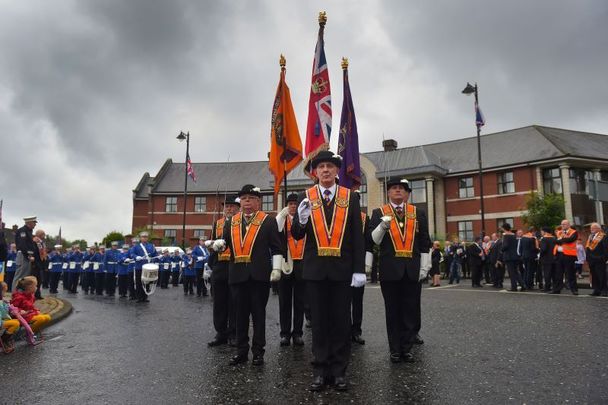 July 13, 2015: The lead Orange party await their signal to begin marching the Twelfth of July parade in Belfast, Northern Ireland. The Twelfth is an Ulster Protestant celebration held annually. It celebrates the victory of Protestant King William of Orange over Catholic King James II at the Battle of the Boyne in 1690. Getty Images

The BBC has announced that it will not be resuming live coverage of Belfast's Twelfth of July parade this year.

The 12th of July parade in Belfast will still be covered by BBC with an hour-long "highlights" programme featuring events at eight different locations, BBC NI interim director Adam Smyth told senior members of the Orange Order on Friday.

The Belfast Telegraph reports that in his letter to Gibson and Donaldson, Smyth wrote in part: "We think there is particular value in seeking to better/more fully reflect Orange Order events across the region and that our highlights programme, which has been popular with local audiences, is the best means of achieving this objective. The Belfast demonstration will, of course, be included within it. And this coverage will be complemented by reports on the BBC's news services across radio, television and online."

Smyth added: "We know that our decision not to resume live television coverage of the Belfast demonstration may be disappointing for some people and have made this decision with careful consideration and based on all usual editorial considerations."

He continued: "We recognise the importance of 12 July events for those taking part and many others within our local community. This is something that we will properly reflect within our output, seeking to describe and explain the significance of what's happening and to make it more generally accessible, including to those with other backgrounds and beliefs."

The Grand Orange Lodge of Ireland has reacted to the announcement with a statement voicing its "immense disappointment."

The group said in a statement: “This decision by BBC NI was reached without meaningful discussion or consultation with the Grand Orange Lodge of Ireland and is immensely disappointing and frustrating, not only for our members but for the many members of the public who watch the programme each year.

“We became aware of the plans to cancel the live broadcast during our annual Twelfth of July planning meeting with BBC NI staff.

“The Grand Secretary Rev. Mervyn Gibson and Sir Jeffrey Donaldson, a former Assistant Grand Master and DUP Leader, then met with Interim Director of BBC Northern Ireland Adam Smyth and asked him to reconsider this decision.

“The BBC is a public broadcasting service and to cancel live coverage of the Twelfth of July - the biggest cultural event in Northern Ireland with tens of thousands taking part and hundreds of thousands more watching at the eighteen host venues – defies logic.

“We pointed out many people cannot attend Twelfth of July parades for a range of reasons. Many are housebound due to illness or old age, while others are in nursing homes – they are the people who will be impacted most by this decision.

“It is hard to accept this as anything other than a further snub to the wider Protestant, Unionist and Loyalist Community and our culture.”

What is the Twelfth of July?

The Twelfth, sometimes called the Glorious Twelfth or Orangemen's Day, is an Ulster Protestant celebration held on July 12 to mark Protestant King William of Orange's victory over Catholic King James II at the Battle of the Boyne in 1690.

The day is primarily commemorated in Northern Ireland, where it is a public holiday, with parades and marching bands hosted by the Orange Order and loyalist groups.

In 2020, Orange Order parades were canceled due to the Covid-19 pandemic and were scaled down significantly in 2021 due to ongoing public health restrictions.

In 2019 - the last parade held before the outbreak of the pandemic - the Belfast parade received one hour and 15 minutes of live coverage and a 39-minute highlights program.