A former British officer in the Irish Guards said on BBC that negative connotations of the regiment's "Micks" nickname have worn off, but Irish people disagree. 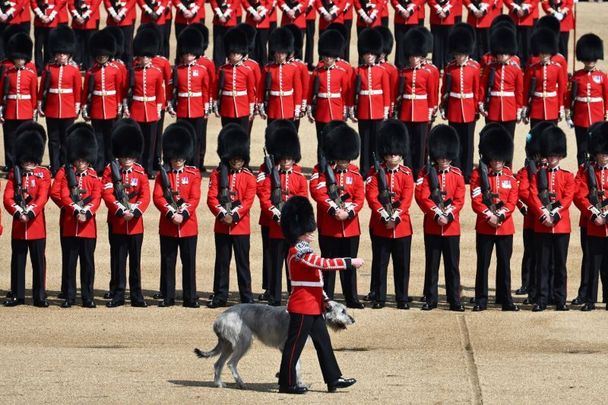 June 2, 2022: The mascot Irish wolfhound dog of the Irish Guards, a regiment of the Household Division Foot Guards, walks with its handler during the Trooping the Colour at Horse Guards in London, England. The Platinum Jubilee of Elizabeth II is being celebrated from June 2 to June 5, 2022, in the UK and Commonwealth to mark the 70th anniversary of the accession of Queen Elizabeth II on 6 February 1952 Getty Images

"Micks," while officially deemed derogatory, is used "affectionately" to refer to the Irish Guards regiment in the British Army.

The Irish Guards, led by Prince William, performed the Trooping of the Colour today, June 2, at the start of Queen Elizabeth's Platinum Jubilee ceremonies in London.

However, one BBC clip covering Thursday's events has stirred some controversy for its mention of the term "Micks," a derogatory term for Irish people or people of Irish descent.

Joe Dwyer, who works in the Sinn Féin office in London, spotted the BBC clip and shared it on Twitter early on Thursday, so far racking up more than 4,600 likes and spurring lots of reactions.

“The year is 2022,” Dwyer wrote, “and a BBC presenter and someone from the British Army are explaining why 'micks' actually isn’t an offensive term for Irish people…”

The year is 2022… and a BBC presenter and someone from the British Army are explaining why “micks” actually isn’t an offensive term for Irish people… 🙄🤦‍♂️ pic.twitter.com/OZpfwOmAAP

The clip features BBC presenter Huw Edwards and former officer in the Irish Guards Jamie Lowther-Pinkerton commenting on the scenes of the Trooping of the Colour.

Lowther-Pinkerton says in the clip: “The Micks have this fantastic mix of guard’s discipline and pursuit of excellence with their Irish irrational tenth, if I can quote Lawrence of Arabia, which makes it the best regiment on the planet, I would say that."

Edwards replied: “I should, as well, explain - you said a few minutes ago, Jamie, that the Irish Guards were affectionately known as ‘The Micks’ and some people watching might think, well, that’s not an altogether nice term.

“But it’s worth underlining, that it’s what you Irish Guards call yourselves?”

“It’s what we call ourselves," Lowther-Pinkerton replied, "and actually it’s been a nickname for so long that any connotations that may or may not have been have worn off.”

“Well, they are marching with pride and with style today,” Edwards said.

Dwyer’s tweet has drawn a mixed reaction, with most agreeing that the use of the term “Micks” is offensive, while some others are arguing that the context overrides the connotations.

Andrée Murphy, who is on the board for Relatives for Justice, tweeted saying: "'Micks'…. And some of us were accused of being anti-British when we questioned the nature of the system…"

Irish woman Sarah O'Neill replied, writing: "When the dictionary describes it as ‘Extremely Disparaging & Offensive. A contemptuous term for a person of Irish birth or descent’ & the person using the term is a former royal private secretary (born in Suffolk), I don’t think it should just be dismissed with a chuckle. Urgh."

Martin O'Neill, a professor of political philosophy, said: "Anti-Irish racism alive and well in 2022 in the British Army and on the BBC. Feels like this Jubilee shindig is allowing lots of people to show us who they really are."

Nigel Walley, however, pointed out that his Cork-born grandfather "very proudly" referred to  themselves and the Irish Guards as "Micks."

Edwards himself has replied to Dwyer's tweet, saying that he questioned Lowther-Pinkerton "precisely" because the term can be found offensive.

Er. Joe. Croeso i 2022. I questioned it PRECISELY because it can offend. That's why. And to ask why some Irish troops happily call themselves by that name. In 20 years of covering this event I have always questioned its use. Diolch o galon. 🏴󠁧󠁢󠁷󠁬󠁳󠁿 #TroopingTheColour https://t.co/bpXPPOFxA0

Indeed, the official website for the Irish Guards says that the regiment is "known affectionately throughout the Army as ‘the Micks.'" The website notes that St. Patrick's Day is the traditional celebration of the Irish Guards, and on that day each year, members of the regiment are presented with fresh shamrock from Prince William.

"Mick," however, is still officially defined by several dictionaries as a slang term that is offensive and derogatory. Judging by Twitter today, Irish people agree.