The Duke and Duchess of Cambridge visited the 1st Battalion Irish Guards at the St. Patrick's Day parade at Mons Barracks in Aldershot for the first time since the outbreak of the Covid-19 pandemic two years ago. 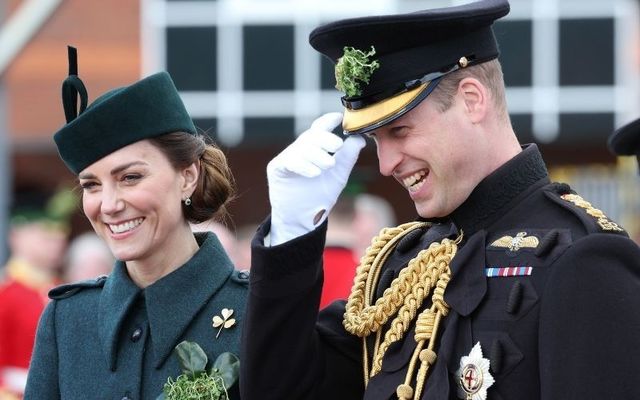 Prince William and Kate Middleton at the St. Patrick's Day parade in Aldershot on March 17, 2022. Getty

Prince William and Kate Middleton have paid a traditional visit to the Irish Guards to mark St. Patrick's Day.

The Duke and Duchess of Cambridge visited the 1st Battalion Irish Guards at the St. Patrick's Day parade at Mons Barracks in Aldershot for the first time since the outbreak of the Covid-19 pandemic two years ago.

Sporting a teal coat and a shamrock brooch, the Duchess of Cambridge presented a traditional sprig of shamrocks to the battalion's officers and guardsmen, who will distribute the shamrocks along the ranks.

Middleton, whose husband is the royal colonel of the Irish Guards, has been tasked with presenting the St. Patrick's Day shamrocks to the regiment since 2012.

The custom began in 1901 and was previously performed by the Queen Mother. More recently, Princess Anne carried out the custom.

The Irish Guards were formed in 1900 following a decree from Queen Victoria to commemorate the Irish soldiers who fought during the Boer War in South Africa.

The parade on St. Patrick's Day concluded with a march-past where Prince William gave the salute.

William and Kate then met with members of the regiment before posing for official Officers' and Sergeants’ Mess photographs. They also posed for photographs with Irish Guards in every rank in the British Army.

They will visit the Junior Ranks dining hall later on St. Patrick's Day where the Senior Guardsman in the battalion will propose a toast to the Duke and Duchess of Cambridge.