The name of PSNI Constable Ronan Kerr was clearly visible on the side of a pyre in Derry before the bonfire was set alight on August 15. 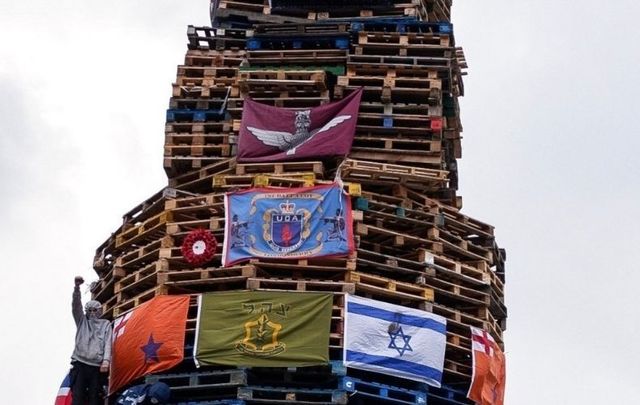 A banner carrying the name of a Northern Irish police officer murdered by dissident republicans in Tyrone in 2011 was among items placed on a widely-condemned nationalist bonfire in Derry on Sunday night.

The name of Constable Ronan Kerr, who was murdered by dissidents in Omagh in 2011, was clearly visible on the side of a pyre in the Bogside area of Derry before the bonfire was set alight on Sunday.

Union flags, Israeli flags, and British military insignia were also placed on the bonfire before it was lit on Sunday night.

Military insignia included that of the Parachute Regiment, whose members were responsible for the killing of 14 unarmed civilians on Bloody Sunday in Derry in 1972.

Nationalists additionally placed a placard containing the name of current PSNI chief constable Simon Byrne on the bonfire, while the names of other individuals were also clearly displayed on threatening banners.

Suzanne Breen, Political Editor at the Belfast Telegraph, shared this picture of the Bogside bonfire on Twitter:

Meanwhile, a second fire in the Galliagh area of Derry City was also festooned with Union flags and British military insignia before it was set alight on Sunday evening.

Sinn Féin councillor Sandra Duffy shared another picture of one of the bonfires, noting that they "do not represent the people of my city and are not wanted:"

As a rep on the council bonfire working group I want to categorically state my opposition to the bonfires lit tonight in The Bogside and Galliagh, these do not represent the people of my city and they are not wanted. Illegal bonfires that represent hate on all sides must stop. pic.twitter.com/r4sLBEsoRu

The PSNI said that it was aware of a banner on the Bogside banner making threats against named police officers, while PSNI Superintendent Darrin Jones said that the matter is under investigation.

"An evidence-gathering operation was in place during this incident and we will now review this to establish if any offenses occurred.

"If any offenses are detected, a full police investigation will be carried out," Jones told the PA.

Nationalist communities in Derry traditionally light bonfires on August 15 to mark the Catholic Feast of the Assumption.

The fires are additionally associated with the introduction of internment without trial in Northern Ireland.

The burning of both nationalist and unionist bonfires has proved a source of controversy in Northern Ireland, with both communities facing criticism for burning symbols associated with each other's culture.

In July, unionists were met with condemnation for lighting dozens of bonfires bedecked in Irish flags.

The nationalist bonfires also coincided with the Apprentice Boys Relief of Derry commemorations, which took place over the weekend.

The annual commemorations, which traditionally feature some of the largest parades in Northern Ireland, celebrate the ending of the siege of Derry in 1689 and have caused controversy in the past by deliberately provoking nationalist communities.