Kneecap says that their new Belfast mural which depicts a PSNI vehicle in flames with the caption "the RUC are not welcome" in Irish is "a piece of fine art." 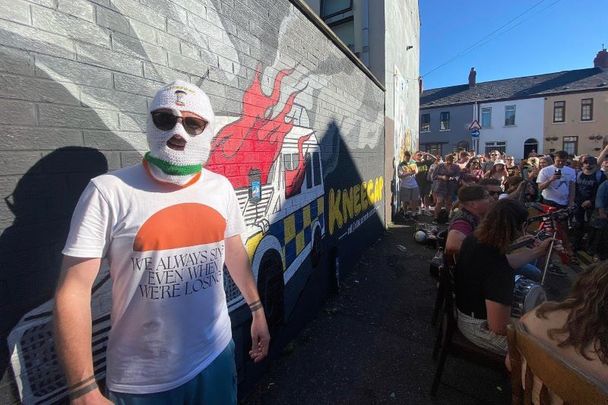 Kneecap's mural was unveiled in West Belfast on Friday, August 12. Courtesy of Kneecap

Kneecap, the Irish language rap trio from Belfast, is defending their controversial mural of a PSNI Land Rover in flames that was unveiled in West Belfast on Friday.

"It’s a piece of fine art," a representative for Kneecap told IrishCentral on Monday.

The mural, which says “níl fáilte roimh an RUC,” meaning “the RUC are not welcome," attracted controversy in recent days after Kneecap unveiled it in front of a sizeable crowd in West Belfast on Friday, August 12.

Earlier this year, a report from the Police Ombudsman of Northern Ireland found “collusive behaviours” by the RUC in relation to a series of murders and attempted murders by the UDA/UFF in south Belfast in the 1990s. 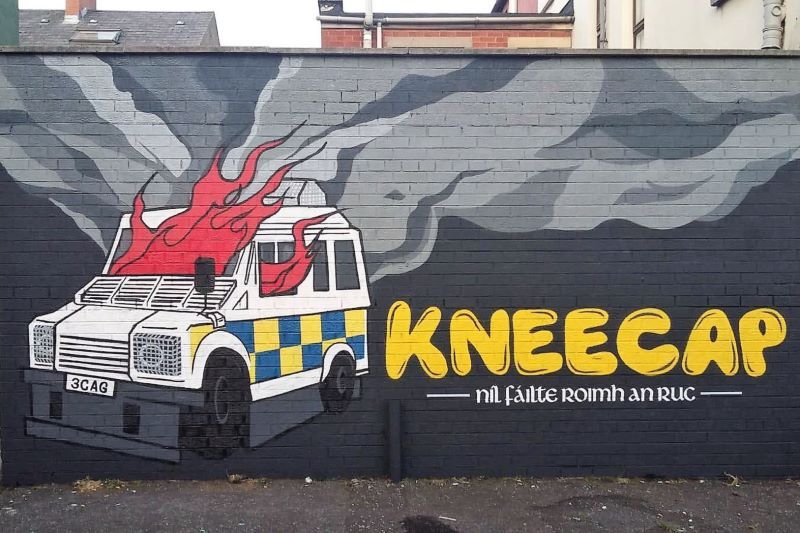 The imagery of the PSNI car on fire is also featured on a t-shirt that is for sale on Kneecap’s website, though as of Monday afternoon, the shirt was sold out.

The mural was unveiled on Friday just hours before Kneecap performed in front of thousands of people at Féile An Phobail in Belfast, described as Ireland's biggest community arts festival.

The thousands in the Falls Park are absolutely loving this concert.

Despite the mural being met with cheers from the crowd when it was unveiled on Friday evening, it has stirred up controversy and drawn the attention of several leading politicians in Northern Ireland.

MLA Naomi Long, leader of the Alliance Party and Justice Minister for Northern Ireland, responded by saying "Normalising/excusing violence, seeking to cause hurt/offence, isn't how to build a better future for us all."

Loathe to give the band more publicity, but as a community we need to start asking ourselves what messages we're sending out about the kind of future we want.

Normalising/excusing violence, seeking to cause hurt/offence, isn't how to build a better future for us all.

The mural might be art but it doesn't make it any less depressing.

This just fosters hatred…. its grooming a new generation of young people with insidious messaging.

Before you fire your whataboutery at me I’ve been clear - no matter where this hatred comes from, no matter what community - it should stop. #UnionOfPeople https://t.co/6g0U2xioi6

This mural is offensive to every serving police officer in Northern Ireland & to many in wider community. Just as I condemn burning effigies, flags, posters on bonfires, I also condemn this. I hope all other political leaders who seek to uphold the rule of law will do likewise. https://t.co/sTpjcAfx6O

However, when Kneecap began to trend on Twitter after the unveiling of the mural, the group thanked the "DUP and all our loyal supporters."

GRMA to the DUP and all our loyal supporters ? pic.twitter.com/bbEQjfwyDw

Kneecap, consisting of Mo Chara and Móglaí Bap, both from Belfast, and DJ Próvaí, from Derry, describe themselves as “a voice which comes screaming from the too-often deprived areas of the North of Ireland.”

Móglaí Bap told the New York Times earlier this year: “Republicanism is so vast and on a spectrum. We like to toy with it. We like to take the irony on, and also not be dictated about what kind of republicanism we’re going to believe in.”

In late 2017, the group's song "C.E.A.R.T.A." (meaning R.I.G.H.T.S. in Irish) was banned by RTÉ's Irish language station Raidió na Gaeltachta due to the song's "drug references and cursing."

The phrase "níl fáilte roimh an RUC," (the RUC aren't welcome"), which appears on the group's new Belfast mural, is used in the song.

Responding to the censure, Móglaí Bap said at the time: "We wanted this song to break stereotypes. We're not saying we agree with using RUC as a term for the PSNI, but it happens in Belfast."