Kneecap, a West Belfast trio consisting of members Mo Chara, Móglaí Bap, and DJ Próvaí, have been growing in prominence since the release of their debut single C.E.A.R.T.A (Irish for rights) in 2017. 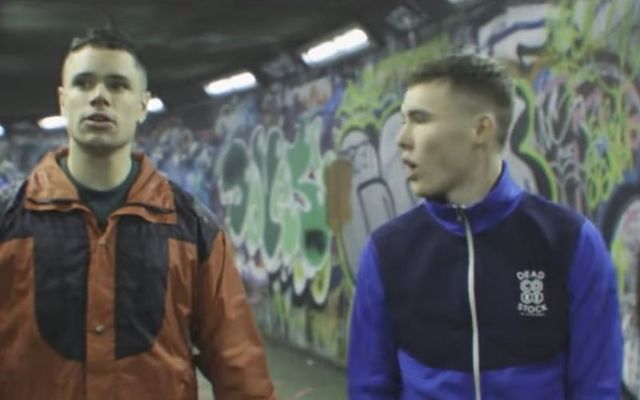 A Belfast hip-hop trio who are pioneering Irish-language rap is helping to reignite interest in the Irish language among younger generations.

Kneecap, a West Belfast trio consisting of members Mo Chara, Móglaí Bap, and DJ Próvaí, have been growing in prominence since the release of their debut single C.E.A.R.T.A (Irish for rights) in 2017.

The group has played sold-out gigs in Dublin and Belfast over the past five years and is experiencing growing popularity in both England and Scotland.

In a column in the New York Times, Una Mullaly writes that the group's popularity stems from their signature blend of ramshackle rave and rudimentary hip-hop beats, mixed with (Irish) republican politics" - all done through the Irish language.

The group was inspired by all-night parties in West Belfast, which featured a blend of Irish traditional music and techno.

"We felt there was something bubbling, and we wanted to represent that," Móglaí Bap told the New York Times.

Mo Chara, meanwhile, told the publication that the group is attempting to highlight that Irish language music does not to revolve around "rural traditional music".

DJ Próvaí, who previously worked as an Irish-language teacher, resigned from his job in 2020 when the school he worked in raised concerns about a Kneecap music video that showed the slogan "Brits out" drawn on his buttocks.

The group's consistent reference to drugs has also left them at odds with hardline Irish republicans, who often take a zero-tolerance approach to narcotics.

"We’re screaming about the ‘Ra even though the ‘Ra would probably shoot us for doing all of these sort of thing," Móglaí Bap told the New York Times.

The band ironically draws its name from a republican paramilitary form of torture often dealt out to those suspected of dealing drugs, but Móglaí Bap said the group is aiming to toy with the "vast spectrum" of Irish republicanism.

"We like to toy with it. We like to take the irony on, and also not be dictated about what kind of republicanism we’re going to believe in."