Families of nine of the 1971 Ballymurphy Massacre victims will receive "substantial" damages, while relatives of the 10th victim are still pursuing action in court. 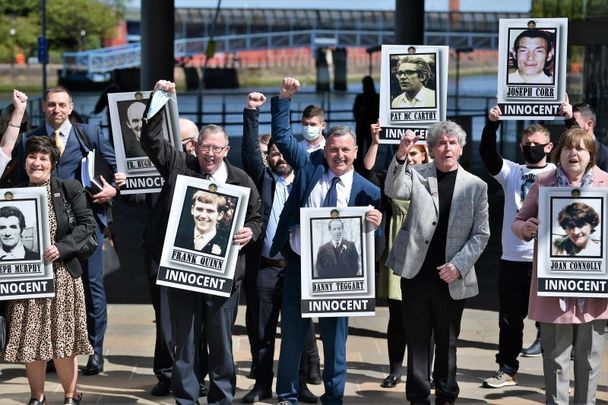 May 11, 2021: Relatives react after the findings of the Ballymurphy Inquest were released by the coroner at the Waterfront Hall in Belfast, Northern Ireland. Getty Images

It took 51 years, but the families of the victims of the Ballymurphy Massacre, one of the worst massacres by the British Army in Ireland, finally won compensation and a form of justice.

Although no soldier has ever been tried for participation in the Ballymurphy Massacre in Belfast in 1971 in which 10 innocent people, including a priest tending to the injured and a mother of eight, were killed, Britain this week agreed to pay “substantial” damages to nine families.

Relatives of the 10th victim are still pursuing action in court.

The undisclosed damages were agreed at Belfast High Court on Monday in a civil action in cases listed for a week-long trial.

But on the first day, confidential settlements were announced in actions against Britain’s Ministry of Defence relating to the deaths of Father Hugh Mullan, Francis Quinn, Joan Connolly, Noel Phillips, Daniel Teggart, Edward Doherty, Joseph Corr, John Laverty, and Joseph Murphy. Claims against the chief constable of the Police Service of Northern Ireland were discontinued.

Last year, an inquest found the victims were “entirely innocent” when British paratroopers went on a rampage between August 9 and 11, 1971, shortly after the introduction of internment in Northern Ireland.

Justice Michael Humphreys said the inquest findings made the conclusion of the civil actions “easier” to reach. He said that given the “arduous nature” of the inquest, it was “the best thing” that the claims were settled without further hearings.

John Teggart's father, Daniel, was among those killed in the series of shootings. Speaking outside court on behalf of the families he said, “Although it was a win, it is tempered with sadness. The settlement doesn’t bring our loved ones back. The hurt, the loss is felt every day.”

He criticized legislation introduced by the UK government to draw a line under so-called legacy issues. A central element of the legislation involves immunity from prosecution for those who cooperate with investigations run by a new information recovery body.

It will also prevent future inquests and civil actions related to The Troubles.

He added, “All victims deserve justice and full access to the courts. The British government isn’t interested in helping us victims.”

Solicitor Padraig O Muirigh, who represented eight of the nine families, said, “The confidential nature of the settlement of this legal action prevents me disclosing the settlement figure. I can confirm, though, that the figure is significant and that our clients are satisfied with the outcome of this litigation.”

The confidential nature of the settlement does not allow me to disclose the settlement figure. However, the settlement was significant and our client were satisfied with the outcome. These proceedings also follow the milestone inquest findings delivered last May. 2/4 pic.twitter.com/awPxoqLvYW

At last year’s inquest, the coroner ruled that the British state had failed to demonstrate that its use of force had been justified. The coroner said there was no evidence to suggest any of the deceased were linked to the IRA.