Victims' groups and politicians across the spectrum are speaking out against the Northern Ireland Troubles (Legacy and Reconciliation) Bill which was introduced today, May 17. 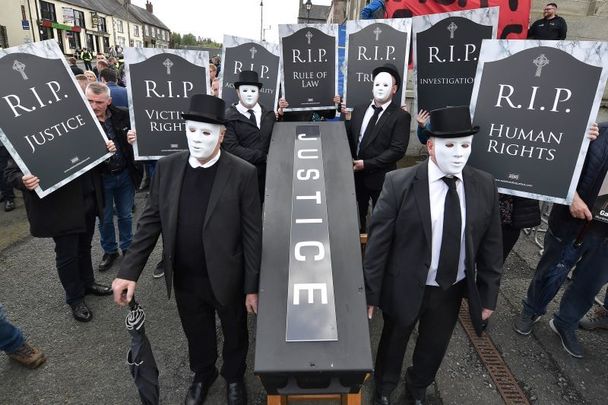 The ICRIR will grant immunity from prosecution, based on an individual’s cooperation with the body’s inquiries, the NIO says. Those who do not cooperate with the independent body will not be granted immunity, and will remain liable to prosecution should sufficient evidence exist, or come to light

The Northern Ireland Troubles (Legacy and Reconciliation) Bill can be read in full online here.

“The current system is failing," Northern Ireland's Secretary for State Brandon Lewis said in a statement on Tuesday, "it is delivering neither truth nor justice for the vast majority of families. It is letting down victims and veterans alike.

“Every family who lost a loved one, no matter who they were, will be provided with more information than ever before about the circumstances of their death."

Lewis said that "a robust and independent investigations process" will be at the center of the new legislation, which will be supported "by an ambitious and comprehensive oral history programme that will allow people to tell their stories and share their experiences."

He added: “And there will not be any automatic access to immunity; it is right that those involved in an investigation cannot obtain ‘something for nothing.’ Immunity will be provided to individuals who cooperate, which provides the best route to give victims and their families answers they have sought for years as well as giving our veterans the certainty they deserve.”

The introduction of the legislation has been met with outrage from victims' groups as well as politicians who have been critical of the proposals since Lewis published a Command Paper on the matter last summer.

Relatives for Justice today labeled the legislation as the "Bill of Shame." The group's CEO Mark Thompson said on Tuesday: “This is a unilateral move away from the Stormont House Agreement and all legal obligations. It ignores the role of the Irish government and the executive parties.

“No matter what way this Bill is dressed up, it still equates to a blanket amnesty.

“It is anti-rule of law, anti-justice, anti-democratic, and anti-Good Friday Agreement.

The Belfast-based Committee on the Administration of Justice (CAJ) strongly criticized the new legacy bill and has called for it to be scrapped in favor of the prior proposals in the Stormont House Agreement.

Brian Gormally, Director of CAJ, said on Tuesday: "The Bill drives a coach and horses through the obligation for a proper, independent, investigation into suspicious deaths, especially where the state may be involved. This is the law of the land, enshrined in the Human Rights Act, itself a product of the Good Friday Agreement."

CAJ is outraged by the new UK legacy bill (published earlier today) – we believe it should be scrapped in favour of previous proposals in the Stormont House Agreement.

Mary Lou McDonald, President of Sinn Féin, said in the Dáil today that the British government's actions are "akin to the actions of a rogue state."

"The British Government's decision to proceed with an amnesty for their troops is an outrage. It means definitively now the shredding of the Stormont House Agreement. It is akin to the actions of a rogue state"
– @MaryLouMcDonald pic.twitter.com/5EgLnH5wjC

Sinn Féin Vice President Michelle O’Neill said the Bill "seeks to pull down the shutters on hundreds of family campaigns for truth and justice."

Unilateral action by the British government in presenting their Legacy Bill seeks to pull down the shutters on hundreds of family campaigns for truth and justice.

Prioritising the demands of their state forces over families is unjust and cruel. I stand with the families.

Colum Eastwood, head of the Social Democratic and Labour Party (SDLP) in Northern Ireland, said: "This British Government has abandoned the concept of partnership when it comes to the sensitive politics of Northern Ireland."

He added: "The people who will lose the most from this new process are those who have already paid the worst price for the failure to deal with the legacy of our past. This is no way to treat victims and the SDLP will oppose it.”

SDLP Leader @columeastwood has said that the British government's decision to push ahead with legacy legislation is an egregious dereliction of duty.

"This is no way to treat victims and the SDLP will oppose it."https://t.co/fN6vuIQVP9 pic.twitter.com/SxyxePe2GF

Doug Beattie, head of the Ulster Unionist Party (UUP) in Northern Ireland, said that while he will review the legislation, "we’ll be clear - as we were with the SHA - there can be no amnesty, no immunity from prosecution for acts resulting in death or injury regardless if it happened in UK or beyond."