More than 30 Members of US Congress have signed a letter urging UK Prime Minister Boris Johnson to reverse the recently-announced Troubles-era amnesty proposals. 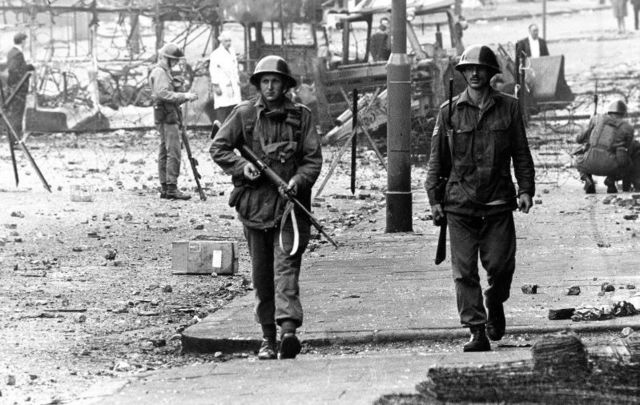 August 16, 1969: British soldiers on patrol beside barbed wire defences at the junction of Percy Street and Falls Road in Belfast during unrest in Northern Ireland. Getty Images

Two Irish American Congressmen have led the bipartisan effort in US Congress to urge Prime Minister Johnson to reverse the amnesty proposals for Troubles-era legacy issues.

More than 30 members of US Congress, on both sides of the aisle, have put their names to a letter issued to UK Prime Minister Boris Johnson urging him to reaffirm the UK’s commitment to the Stormont House Agreement and “reverse” the proposal to introduce amnesty for Troubles-era legacy issues.

According to a statement from Congressman Boyle, whose father is from Co Donegal, the bipartisan letter issued to UK Prime Minister Boris Johson calls on British Parliament to "reaffirm its commitment to the Stormont House Agreement and reverse its decision to introduce new legislation that would modify legacy laws and institute a ban on legacy inquests and prosecution of former soldiers who served in Northern Ireland during the ‘Troubles.’"

It comes after British Parliament announced this summer its plans to introduce legislation this fall that would mark an end to Troubles-related prosecutions. The proposed legislation, which would apply to former members of the security forces and to ex-paramilitaries, would essentially mark the end of future inquests and civil actions related to the conflict.

Boyle noted in his statement: “All five of Northern Ireland’s main political parties, along with the Irish government and numerous victims’ groups, have voiced strong opposition to this suggested blanket ban on prosecutions of Troubles-era offences.”

The letter issued to Johnson says in part: "To be clear, we strongly disapprove of these proposals. We believe that they would not only prevent a pathway to justice, but that they would also strip these families of their legal rights protected under European Law and the Good Friday Agreement."

It adds: "We are concerned that these proposed legacy laws would strain the British-Irish relationship and cement widespread feelings that justice is again being denied."

The letter concludes: "We urge you to reexamine these proposals, reverse the decision, and reaffirm your commitment to the Stormont House Agreement."

Congressman Boyle said: “It is deeply disturbing to learn that British Parliament is planning on reneging on its commitment to the Stormont House Agreement.

“Such a move would not only prevent a pathway to justice for the bereaved of the conflict, but would also strip families of their legal rights protected under European Law and the Good Friday Agreement. To this day, nearly 1,700 conflict-related cases still await investigation.”

Elsewhere on Thursday, US Speaker of the House Nancy Pelosi met with UK Prime Minister Boris Johnson in London. After their meeting, Pelosi issued a statement which said in part: "Respectful of the will of the British people and Brexit, I reiterated the strong bipartisan support that the Good Friday Accords continue to enjoy in the United States Congress and our hope that the ongoing negotiations will yield a positive outcome that recognizes this landmark agreement."