A Fragile Peace: filmmakers to document Brexit along the Irish border

Filmmakers are setting out to determine whether or not the Good Friday Agreement is threatened in the face of Brexit. 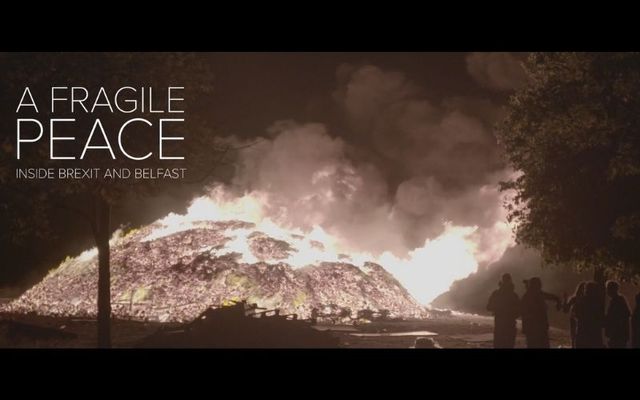 Filmmakers are setting out to determine whether or not the Good Friday Agreement is threatened in the face of Brexit. Maci Duffy Productions, Inc / Vimeo

Irish American filmmaker Rory Duffy is on a mission to document Brexit as it unfolds along the Irish border.

Read More: The Irish border explained: why is it holding up Brexit?

In 2018, Duffy was in Northern Ireland for the 20th anniversary of the signing of The Good Friday Agreement, the deal that essentially ended the 30-year era of The Troubles that saw more than 3,500 people die amidst sectarian conflict.

Duffy attended the 20th anniversary of the events as a guest of Hannah Richert, who works with The Clinton Foundation and now serves as producer for Duffy’s forthcoming documentary. In 1998, US President Bill Clinton was one of the key players in getting the signing of the GFA over the line.

Duffy and Richert toured Belfast, including both the Falls Road and Shankill Road, around the time of the 20th anniversary and Duffy now recalls that the celebrations were partially overshadowed by concerns of instability in the wake of Brexit.

Less than two years earlier, as the UK as a whole voted narrowly to exit the European Union, Northern Ireland had voted to remain. Throughout the Brexit campaigns, Northern Ireland never seemed to be a matter of concern, but now more than three years later, the border between Ireland and Northern Ireland is the main hold up in negotiations.

Duffy and his crew are now keen to capture the mood in Northern Ireland as Brexit, albeit slowly, unfolds. The filmmaker likens the impending Brexit to that of the “wider anxiety” and “confusion” that permeated ahead of Y2K.

Duffy and his crew - which includes Richert as a producer and Tymon Brown as editor and producer - will speak with both politicians and members of the public to not only assess the mood about Brexit, but to better understand whether or not The Good Friday Agreement is being compromised.

Duffy told IrishCentral in a phone call that he and Brown are traveling to Northern Ireland later this month to coincide with what is supposed to be the UK’s exit date of October 31.

Brexit, however, has been twice delayed already this year, meaning a third delay is not out of the realm of possibility. Duffy and his team are cognizant of that, if not galvanized - how would yet another delay affect the citizens of Northern Ireland?

One of the aspects of Brexit that Duffy and his team are keen to explore is how Brexit has become the “new normal.” People who grew up in the aftermath of the Good Friday Agreement are entering adulthood in the shadow of Brexit - how does this shape their opinions and worldview?

Similarly, with Brexit having been in progress for over three years now, how does that shape the day-to-day lives of the people living in the North? A constant sense of waiting for the worst to happen has, not surprisingly, given way to a sense of anxiety in the region, Duffy says.

Duffy has already filmed a short which will now serve as the prologue for the feature-length film he and his team will be crafting together in the coming months. The 12-minute short film features archival footage from The Troubles, as well as commentary from Mayor of Derry John Boyle, former Irish Ambassador to the US Anne Anderson, US Representative Richie Neal, among others:

Included in the short film is a major nod to an often overlooked portion of the the Good Friday Agreement: the women’s movement. Producer Hannah Richert now tells IrishCentral: "Our film will shed light on the women's movement in Northern Ireland because there is no Good Friday Agreement without them. The foundation for peace established by the women of Northern Ireland across the divided communities caught the attention of the Clinton administration."

Read More: "Ireland owes this country nothing" US novelist takes UK to task over Brexit

Duffy and his crew are now appealing for donations to help fund their filming over the coming months. To support the project, you can donate on their Fractured Atlas page; all donations are tax-deductible.