How Ireland is reacting to Storm Lorenzo with its best humor

As Storm Lorenzo has Ireland battening down the hatches, there plenty more bread jokes to be told. 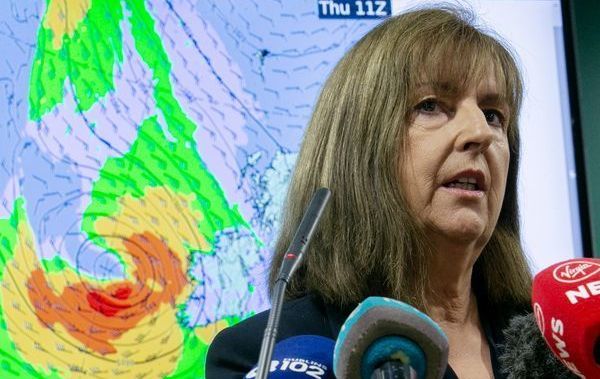 Head of Forecasting at Met Éireann Evelyn Cusack briefing the media ahead of storm Lorenzo as it progresses across the Atlantic. Sam Boal/Rollingnews.ie

Storm Lorenzo: Ireland jokes away the worry as ex-Hurricane Lorenzo powers towards its shores.

Hurricane Lorenzo, the strongest storm ever recorded in the north Atlantic basin, is still hurtling towards Ireland at an "incredible pace" expected to reach the coast at some point on Thursday night.

The Storm Lorenzo Ireland jokes keep coming, however, as the Irish deal with the weather catastrophe the best way they know. Here are some of our favorites.

Everyone in Ireland waiting to see if they get a day off tomorrow...#StormLorenzo pic.twitter.com/TL7XHP2Fh2

The Irish Met Office would sincerely like to thank President Trump for his help in charting the course of Storm Lorenzo. May God have mercy on all the souls of Alabama#StormLorenzo pic.twitter.com/MQay5xyqo3

Ireland during a major storm: C'mon make it a red weather warning so we can have the craic, buy all the bread and go to the pub

Rest of the world during major storm: stocks up on essentials and hole up safely.#stormlorenzo

Workers on the east coast quietly checking if it's staying yellow but hoping for red #stormlorenzo pic.twitter.com/5b1HSxWLFr

Irish people running to the shop for Brennans, Tayto, teabags and milk before #StormLorenzo...☕拏 pic.twitter.com/utzMC437eU

Ireland: the only country who wished that the fast approaching hurricane would get even WORSE.. just so we can get the day off work #stormlorenzo

Only the Irish want a storm to be bad...

"Did ya hear storm Lorenzo is only a yellow warning!"

"I know, I'm raging, was hoping it was gonna be red, really want a day off work..."#Ireland #stormlorenzo

How are you preparing for the storm? Let us know in the comments section, below.