Cllr Charlie Farrelly says that Vicky Phelan, who is currently in the US, attending the White House for St. Patrick's Day would "put an end to all the controversy." 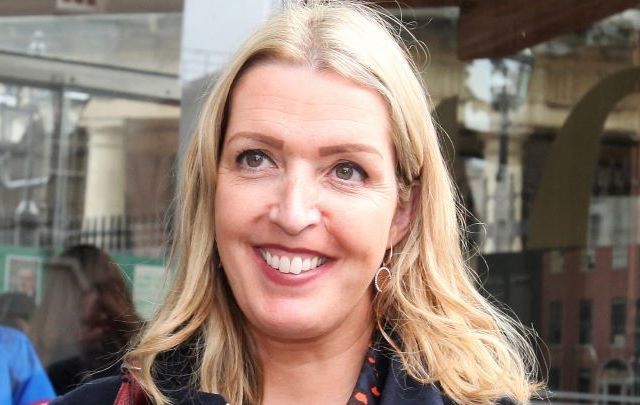 October 22, 2019: Vicky Phelan on her way into the Dail (Leinster House) to hear the Taoiseach apologize to the victims of the CervicalCheck scandal. RollingNews.ie

Irish woman Vicky Phelan is credited with exposing Ireland's CervicalCheck scandal and is currently in Maryland, about an hour's drive from Washington, DC, where she is receiving treatment for cervical cancer.

The question of whether or not the Taoiseach should go to Washington, DC for the traditional St. Patrick's Day presentation of shamrocks to the US President has been the top of debate in recent days.

At the time of publication, Taoiseach Micheál Martin has not confirmed whether or not he intends to travel to the White House St. Patrick’s Day celebrations, nor has the Biden - Harris Administration extended an invite to the Taoiseach or publicly confirmed any St. Patrick’s Days events.

In a public Facebook post shared on January 30, Councillor Farrelly suggested Vicky Phelan attend the annual event should it go ahead.

“I believe it would put an end to all the controversy about whether he should or should not travel during these current Covid 19 restrictions,” Farrelly wrote.

“I also believe it would be a wonderful gesture from the Irish Government towards a woman who has been badly let down by the State over the last number of years. It would be great to find out your views about this suggestion.”

SAVE THE CONTROVERSY : I was just wondering if it would be a good idea if our Taoiseach Micheal Martin would ask this...

That's the first I've heard of it....BUT I certainly wouldn't say No if I was asked. It would be an honour 🥰

Speaking with Jerry O’Sullivan for the Kerry Today podcast on Radio Kerry on February 2, Councillor Farrelly said his view is personal and not political, and that if the Taoiseach were to travel to the US, it would be a "huge, huge slap in the face" to the Irish people who have sacrificed so much over the past year.

“I know relations and economic relations are very, very important," Farrelly acknowledged on the podcast. "It’s so important to keep in line with our friends in the USA, especially now that we have an Irish American there, Joe Biden, it’s more important.

“But still, I think it would just be a huge backlash we could do without if our Taoiseach went.”

Referring to his Facebook post, Farrelly said maybe two or three people of the thousands that replied disagreed with his proposal.

Farrelly said he wrote an email to Micheál Martin’s offices in Cork and Dublin “because I feel very, very, very, very headstrong about this that he should not go.”

Farrelly went on to say: “It’s not an anti-government thing, this is a personal opinion of mine. There are other times, Joe Biden will be back in Mayo, hopefully, before the end of the year, maybe once or twice.

"There are other times the Taoiseach can go, certainly later on in the year."

Farrelly suggested that should she be up for visiting the White House, Phelan could be accompanied by Ireland's Ambassador to the US Daniel Mulhall.

Farrelly believes that if the Taoiseach decides to go, "there is going to be biggest, unmerciful backlash here from the Irish people.”

Farrelly says he believes the Taoiseach should lead by example and not travel.

“We’re all in this together. Well, if he goes to America to represent Ireland on St. Patrick’s Day, I personally don’t think he’s showing a great example.”

Farrelly went on to suggest that the Taoiseach attend the event virtually: “We’re all Zoom meetings, we’re all webinar meetings now. Everything is done virtually. Why doesn’t he join Daniel Mulhall and Vicky Phelan, and whoever else should be there to represent Ireland? Why doesn’t he join them virtually?”

Farrelly did note that he has no contact with Phelan and clarified that she should only go to the meeting if her medical team agreed it was appropriate.