Brexit: Irish leader sees "pathway towards an agreement in the coming weeks"

Taoiseach Leo Varadkar and Prime Minister Boris Johnson met on October 10 in the UK to discuss Brexit, which is scheduled for later this month. 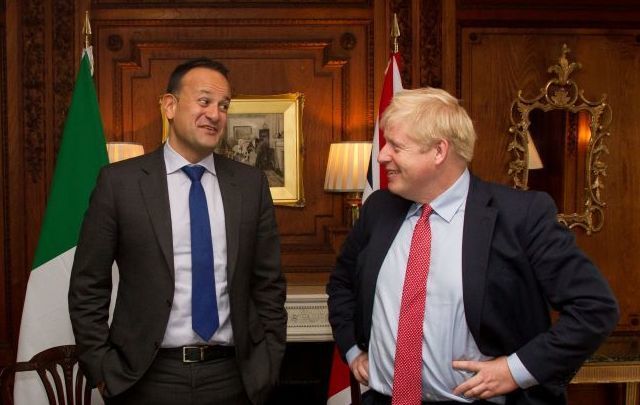 Ireland’s Taoiseach Leo Varadkar met with UK Prime Minister Boris Johnson on Thursday to discuss the possibility of a deal ahead of Brexit, which is scheduled to happen on October 31.

The location of the pair’s meeting, which was held at the Thornton Manor hotel outside Liverpool in the UK, was kept a secret until only right before the duo arrived. Their meeting was closed to the media.

Here in Cheshire in the UK with PM @BorisJohnson to talk #Brexit. Looking forward to a detailed discussion to see if we can make any progress pic.twitter.com/zZeC4MQuZY

Following the meeting between the leaders, Taoiseach Varadkar shared this joint statement from him and Prime Minister Johnson:

Here’s our joint statement following my meeting with @BorisJohnson in Cheshire this afternoon pic.twitter.com/RxjF9qFte8

It read: “The Taoiseach and Prime Minister have had a detailed and constructive discussion.

“Both continue to believe a deal is in everybody’s interest. They agreed they could see a pathway to a possible deal.

“Their discussions concentrated on the challenges of customs and consent.

“They also discussed the potential to strengthen bilateral relations, including on Northern Ireland.

“They agreed to reflect further on their discussions and officials would continue to engage intensively on them.

“Following their discussions, The Taoiseach will consult with the EU Task Force and the UK Brexit Secretary will meet Michael Barnier [EU's Chief Negotiator for the United Kingdom Exiting the European Union]  tomorrow morning.”

Read More: "Ireland owes this country nothing" US novelist takes UK to task over Brexit

The Irish Times reports that after the meeting, Taoiseach Varadkar said:  “I think sometimes at this point in negotiations and discussions, the less said the better. But what I can say is that I had a very good meeting today with the prime minister and our teams together - very positive and very promising. I am now absolutely convinced that both Ireland to Britain want there to be an agreement.

“That’s in the interests of Ireland, the United Kingdom, and the European Union as a whole. And I do see a pathway towards an agreement in the coming weeks.”

He added: “I don’t think this should be seen in the context of who’s making concessions or who the winners and losers are. I don’t think that’s the game any of us want to play. What this is about is securing an agreement that works for the people of Ireland and also the people of Britain and Europe.

“It remains our position that there cannot be a hard border between North and South. And we must continue to have a situation whereby the all-island economy can continue to deepen and function well.

“I think it is possible for us to come to an agreement, to have a treaty agreed to allow the UK to leave the EU in an orderly fashion and to have that done by the end of October. But there’s many a slip between cup and lip."

Do you think a Brexit deal will be reached ahead of October 31? Let us know in the comments