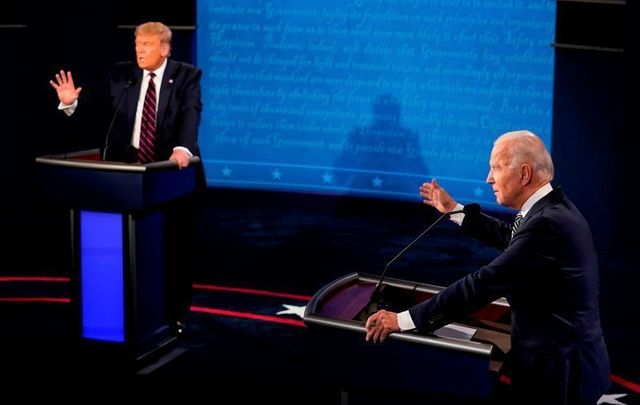 Tonight’s presidential debate will be hosted from Belmont University in Nashville, Tennessee, and will be moderated by Kristen Welker, White House Correspondent for NBC News.

The 90-minute debate will consist of six segments of approximately 15 minutes each. Welker will open each segment with a question, after which each candidate will have two minutes to respond. Trump and Biden will then have an opportunity to respond to each other. The moderator will use the balance of the time in the segment for a deeper discussion of the topic.

The Commission on Presidential Debates (CPD) says that Welker has selected the following topics to be discussed during the debate, though they are subject to change:

Unlike the first debate, the second debate will feature the muting of a candidate's microphone while the other candidate has the floor, the CPD confirmed on October 19: “Under the agreed upon debate rules, each candidate is to have two minutes of uninterrupted time to make remarks at the beginning of each 15 minute segment of the debate. These remarks are to be followed by a period of open discussion.

"Both campaigns this week again reaffirmed their agreement to the two-minute, uninterrupted rule.

"The Commission is announcing today that in order to enforce this agreed upon rule, the only candidate whose microphone will be open during these two-minute periods is the candidate who hs the floor under the rules. For the balance of each segment, which by design is intended to be dedicated to open discussion, both candidates’ microphones will be open.”

The debate will begin tonight, October 22, at 9 pm EST and will run for 90 uninterrupted minutes. You can tune into the second and final presidential debate here below, courtesy of C-SPAN:

President Trump and former Vice President Biden were originally supposed to meet in three debates prior to the upcoming election. However, after news emerged in the early hours of October 2 that President Trump had tested positive for coronavirus - just days after his September 29 debate with Biden - the second debate was called into question over health concerns.

While Biden agreed to the remote arrangements, Trump said on Fox Business: "I’m not going to waste my time at a virtual debate."

On October 9, the CPD announced that the second debate would not proceed.

Instead, Biden took part in a town hall, which was hosted on ABC on October 15, while Trump took part in his own town hall at the same time on the same night on NBC.

There are less than two weeks until the 2020 US Presidential election, which is on November 3, though voting has already begun across the country. As of Wednesday evening, the day before the final debate, Biden appears to be leading Trump in national polls.