Massive increase in Americans in Ireland registering to vote 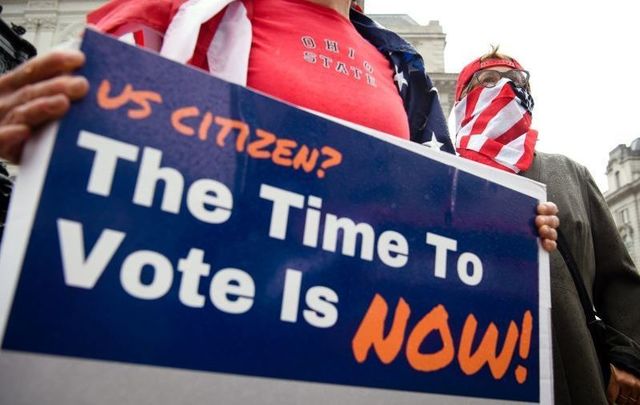 Members of Vote From Abroad get their message out in London in September 2020. Getty Images

The number of overseas Americans who have registered to vote in next month's US presidential election is almost double the figure from 2016, according to the official overseas arm of the Democratic Party.

Carija Ihus, chair of Democrats Abroad Ireland, said that more than two million overseas Americans have requested ballots for the upcoming election, compared to around one million in 2016.

In Ireland, the number of registered voters has increased by over 210% since 2016, Ihus said, and there is a clear reason for this proliferation in voter registration.

She said that almost every American voter she has encountered this year has been passionately for or against President Donald Trump and that they have expressed a strong desire to vote as a result.

"With Trump being in office, he's highly controversial with what he says and what he does. People are very passionate about him. They either really like it or they really don't," Ihus told IrishCentral.

Ihus said that around 80-90% of Americans living in Ireland that she has encountered while working with Democrats Abroad have expressed an intention to vote for Democratic candidate Joe Biden next month and she believes that Trump is viewed less favorably by Americans overseas.

She said that living in a foreign country gives American ex-pats a perspective that Americans living at home simply don't get.

"Here in Ireland, we're lucky with how we live with things like nationalized healthcare," Ihus said.

"We have really good worker rights protection and we have great unemployment support. Even during COVID, there's been relief where people who have been laid off have been supported and been able to pay bills and put food on the table for their families.

Americans living in Ireland have access to non-partisan press that delivers unbiased news, Ihus said, and that means that they tend to be more informed than voters in America.

She said that American people usually only consume news that supports their own point of view and that are generally the targets of misinformation and confusing messages.

"When you're outside some of the different propaganda-style news stations in the US you get a different perspective," Ihus said.

"There are a lot of things here in Ireland that are done to prevent that. We have a press ombudsman here and media have to be held to certain standards. You've got laws around libel and slander and it results in a more honest media than the US."

Having said that, Democrats Abroad are keen to help as many overseas Americans register to vote as possible, regardless of their political affiliation, Ihus said, and the group has significantly increased the number of registration drives it has carried out this year compared to four years ago.

Members of the political group have traveled as far afield as Letterkenny in Co Donegal and Carlingford in Co Louth in the hope of convincing eligible Americans to vote next month.

"It's about making sure that everyone who can vote and wants to vote knows that they still can," she said.

But time is running out. Americans can still register to vote in some US states, but that number is getting smaller and smaller as November's election draws nearer.

Ihus said that the next major cut-off point for voter registration is next Monday, October 19, and encouraged people to register as soon as possible by heading to VoteFromAbroad.org.

She also encouraged voters to get their votes in as quickly as possible to ensure that their ballot is counted.

It takes about two weeks for Irish post to reach US voting centers, she said, and only 30 states accept voting by email or fax. The remaining 20 states accept postal voting only and Ihus urged voters to send their ballots in "as soon as humanly possible."

For any voters from states like Alaska and Hawaii, Ihus said that it may be time to consider a courier service.

Ihus believes that mail-in ballots could play a huge role in next month's election, particularly those ballots from overseas.

There are 6.5 million Americans in foreign countries who are eligible to vote in the election, a figure that is greater than the populations of 13 different states, and Ihus thinks that overseas voters could greatly influence this year's election if they vote overwhelmingly in favor of one candidate.

"Sometimes a state is decided by a couple of thousand votes, or even a few hundred," she said.

She urged Democrats to ignore the polls that place Joe Biden in a healthy lead and act as if he was losing the election, arguing that every single vote will count on November 3.