Trump says he won't waste his time with virtual debate, Biden will participate

The Commission on Presidential Debates (CPD) announced on Thursday that Biden and Trump will join next week's townhall style debate from remote locations. 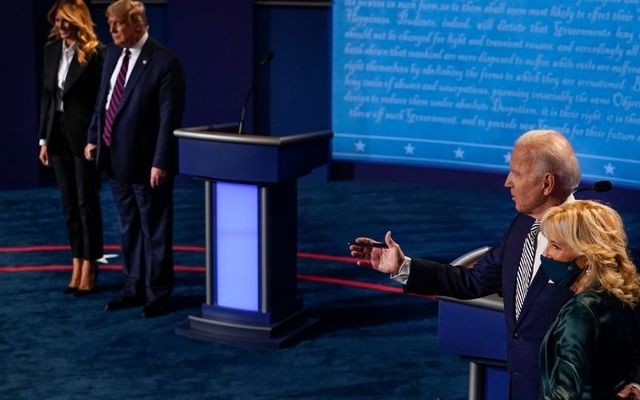 Organizers of the second presidential debate between Donald Trump and Joe Biden have announced that it will take place virtually, but the American President has claimed that he is not "going to waste" his time on a virtual debate.

Joe Biden, meanwhile, has announced that he will participate in the debate, which is due to take place on Thursday, Oct. 15 in Miami.

The Commission on Presidential Debates (CPD) announced on Thursday that Biden and Trump will join next week's townhall style debate from remote locations "to protect the health and safety of all involved."

The CPD said that moderator Steve Scully and the audience will gather in Miami's Adrienne Arsht Center for the Performing Arts during the debate, where they will be able to put questions to the two candidates.

Trump, however, said that he would not take part in the debate in an interview with Fox Business on Thursday morning.

"I’m not going to waste my time on a virtual debate. That’s not what debating is all about," Trump told Fox Business. "You sit behind a computer and do a debate. It’s ridiculous, and then they cut you off whenever they want."

Trump just now on Fox Business: "I’m not gonna do a virtual debate."

"I'm not gonna waste my time on a virtual debate." pic.twitter.com/VRiGNN7V9q

The Trump campaign has since released a statement confirming that the President would not be participating in a virtual debate.

Bill Steipen, manager of the Trump 2020 Campaign, said in the statement that the President won the first debate and that the CPD was trying to avoid the same outcome by moving the debate online. He said that the Trump Campaign would hold a rally on the day of the debate instead.

"President Trump will have posted multiple negative tests prior to the debate, so there is no need for this unilateral declaration," Steipen said. "The safety of all involved can easily be achieved without canceling a chance for voters to see both candidates go head to head. We'll pass on this sad excuse to bail out Joe Biden and do a rally instead."

The Biden Campaign, meanwhile, announced that the former Vice President was looking forward to the virtual debate.

"Vice President Biden looks forward to speaking directly to the American people and comparing his plan for bringing the country together and building back better with Donald Trump's failed leadership on the coronavirus that has thrown the strong economy he inherited into the worst downturn since the Great Depression," said Kate Bedingfield, deputy manager of the Biden Campaign.