Taoiseach Micheál Martin told reporters in NYC that the Irish government has always been supportive of a US Special Envoy to Northern Ireland. 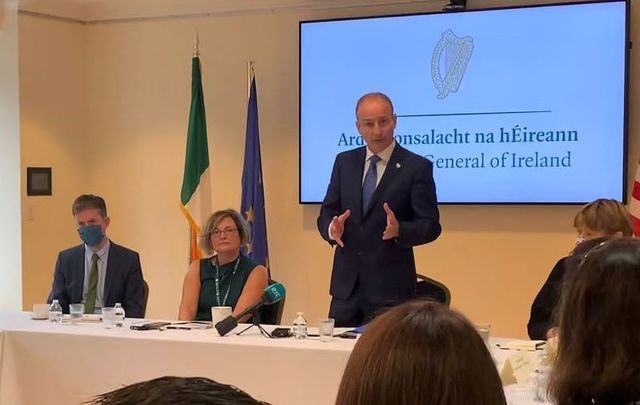 The appointment of a U.S. Special Envoy for Northern Ireland would be welcomed by the Irish government, Taoiseach Micheál Martin said during a press briefing with local Irish media in New York last Thursday.

Martin spent five days in New York, primarily for UN-related engagements, but took time out of his schedule to meet with representatives of local Irish community groups at the Irish Consulate to hear how they survived during the pandemic, and what they need to stay vibrant for the future.

Speaking to the media afterward, Martin said the Irish government “has always supported the appointment of an envoy, and we would be supportive of that again.

“It’s a matter for the president,” he continued, “and to be fair, the president himself has taken a personal interest in Northern Ireland and the Irish question.”

Martin praised President Biden’s staffers for being “consistently focused on the Irish issue,” and said that past American envoys “have brought different added value to the table.”

“I think an envoy could be positive,” he added.

With regards to possible Irish inclusion in the E-3 visa program, which grants thousands of U.S. work visas each year exclusively for citizens of Australia, Martin said that the effort to make Ireland eligible for the visas as well would have to “restart.”

When asked if progress on that front was dormant, Martin replied, “I wouldn’t say dormant is the correct word. There are talks going on behind the scenes. We have to plan the next strategic approach to this.

“We did get very close the last time,” he said. “There has to be work done in advance of (a bill) going on the House floor again.”

Martin said he was “heartened that the Irish American voice is still very strong on all levels,” despite the pandemic. Many of the groups he met spoke about the survival skills they were forced to acquire to keep their groups alive and connected to those they serve.

“I got the sense of partnership, a new chapter in our relationship post-pandemic,” Martin said after meeting the group representatives. “A number of participants were saying that they needed to work together during the pandemic. They feel the need to do more collectively, and we need to respond to that.”