Taoiseach says a EU-UK trade war could be looming

“It’s very clear that everything is on the table in terms of any response to what might happen," Taoiseach Micheál Martin said of a potential EU-UK trade war. 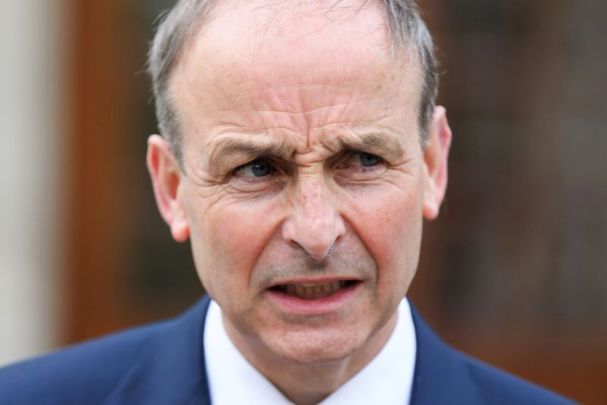 Irish and US politicians have stepped up pressure on Britain to realize the trade it could lose in Europe and across the Atlantic if it pursues its intention to breach a deal intended to maintain a soft Irish border.

Sinn Féin leaders traveled to London on Tuesday for a vital meeting with Conservative MPs on Northern Ireland, just a day after Taoiseach Micheál Martin indicated a trade war between the EU and Britain is on the table if Boris Johnson’s government breaches the Irish Protocol.

Sinn Féin Vice President Michelle O’Neill, first minister-designate of Northern Ireland, told BBC Radio 4 in advance of her meeting with Conservatives that the plan of Johnson and his Foreign Secretary Liz Truss to unilaterally breach the Protocol was wrong and was pandering to the Democratic Unionist Party (DUP).

The Protocol is Britain’s agreement with the EU to ensure a soft border in Ireland after Brexit. It is opposed by the DUP whose members are refusing to participate in power-sharing after the recent Stormont election.

O’Neill said, “The reality is that the Protocol is working. The reality is the business community at home want to see economic certainty. They want clarity around what’s next.”

Her meeting at Westminster, where Sinn Féin continues to refuse to sit in the Commons, was held as Johnson faced fresh criticism over new photographs showing him holding a drink at a leaving party in Downing Street during Covid lockdown restrictions.

The meeting also took place on the same day as Congressman Richard Neal, heading a delegation of US politicians concerned about British plans to change the protocol, addressed the Seanad, the upper house of Parliament, in Dublin on Tuesday evening.

The American delegation, before their arrival in Ireland, had visited Brussels and London and met Truss.

During a meeting with Martin on Monday, they spoke about the need for the EU and the UK to find a negotiated settlement to the protocol dispute.

Really good meeting with @RepRichardNeal and his Congressional colleagues at Government Buildings today.

Deep understanding of need to protect the GFA, and to resolve issues around the Protocol.

Neal is the chairman of the influential Ways and Means Committee in the US House of Representatives that must sign off on any trade deal between the US and the UK.

He told The Irish Times on Tuesday that overriding the Brexit deal on Northern Ireland would be an act of “bad faith” by the UK government and would send “the wrong message.”

He and US Speaker of the House Nancy Pelosi have repeatedly said there will be no US-UK trade deal if Brexit jeopardized the Belfast Agreement.

Shortly after his meeting with Neal, the Taoiseach had a Dublin meeting with Netherlands Prime Minister Mark Rutte. That’s when Martin refused to rule out a trade war with the UK over the Northern Ireland Protocol, reported the Irish Independent.

Martin, when asked if trade war was possible, said, “It's very clear that everything's on the table in terms of any responses to what might happen.”

He told journalists about a possible economically severe EU response.

“The UK government has declared an intention to do something that hasn’t happened yet. So we will be calibrated, and the European Union will take things step by step and do so in a sensible way, always mindful that we believe there’s a way to resolve this,” he said.

Rutte said the Netherlands stood shoulder to shoulder with Ireland.

“I think Boris Johnson will know very well what the next steps could be. Let’s hope it doesn’t come to that,” he said.