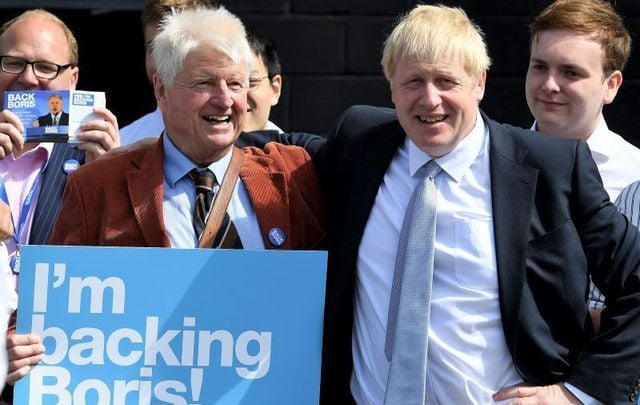 Stanley Johnson, Boris Johnson's father, has apologized for comments he made about the Irish last year. Getty Images

Boris Johnson’s father, former MEP Stanley Johnson, has “apologized profoundly” for the shocking comments he made about the Irish on a British talk show last year.

During an appearance on ITV’s ‘Good Morning Britain’ last October, Stanley Johnson was part of a discussion regarding who should be on the new  £50 banknote in the UK.

Johnson was a firm supporter of former Prime Minister Margaret Thatcher being featured, while his co-panelist George Calloway was in opposition.

One of the hosts asked Johnson if Thatcher, who died in 2013, would have been able to negotiate Brexit. At the time of the 'Good Morning Britain' discussion, Theresa May was still Prime Minister and the Brexit deadline had yet to be delayed amidst the impasse.

Johnson replied: “Do you know what Mrs. Thatcher would have said? She would have said it’s quite intolerable that this whole question of a Northern Ireland border has come to dominate the decision about the future of our country.”

Johnson was then asked, how would Thatcher fix it?

You can watch the exchange on 'Good Morning Britain' here, with Johnson's comments coming in about 6:05:

On Tuesday, the same day his son Boris endured a brutal first day back in Parliament, Stanley Johnson told Newstalk Breakfast that he was apologetic for his comments last year.

Stanley told Newstalk that he “shudders” to think of the “amount of abuse” his son receives as Prime Minister, adding that “Boris absolutely doing the right thing here” regarding his management of Brexit.

“I cannot fault him in comparison with the previous administration. He has set a direction of travel and he is going down it. Even from the Irish point of view, this is exactly the right route to go down.”

When asked about the Irish comments he made on 'Good Morning Britain' last year, Johnson said: “I’m terribly sorry if I said that, obviously I did say that, I would like to apologize profoundly."

“Peace in Northern Ireland is absolutely crucial, absolutely vital. We have the Good Friday Agreement.”

“But the point I’m trying to get at here - both the Irish government and the British government have made it absolutely clear that under all circumstances they are not going to construct a hard border in Northern Ireland, that goes without saying.”