As a government in Ireland has yet to be formed, Sinn Féin's rallies around the country after Ireland's General Election have drawn exceptional support. 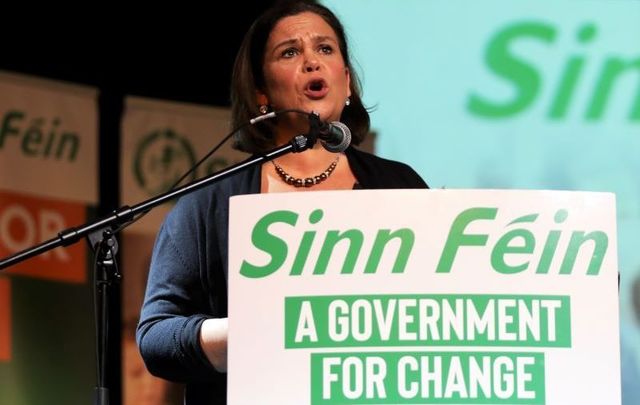 So many people turned up at a public rally in support of Sinn Féin in Dublin this week that at least a hundred people were left standing outside in the cold.

But, instead of just turning them away, the party’s spokesman on finance, Pearse Doherty TD, went out to address those who could not get in from the top of the steps at the main entrance to Liberty Hall.

. @PearseDoherty addressing the crowd outside Liberty Hall who can't get in as it is too packed inside. pic.twitter.com/0A8FzfxXEW

It was a moment that conjured up images of other eras when Irish statesmen such as Daniel O’Connell or Eamon De Valera, without the aid of amplification, would address huge crowds on hillsides or in town centres throughout Ireland.

The surge in support for the party of Gerry Adams, the late Martin McGuinness, and hunger striker Bobby Sands, once known as the political wing of the Irish Republican Army (IRA), has been the story of the year so far in Irish politics.

The party’s success in winning 37 seats in the Dáil on February 8 has sent shock waves through the Irish establishment, given that they had just one seat in the Republic’s parliament as recently as the 1997 General Election.

In many parts of Ireland, Sinn Féin now have representatives in the Dáil for the first time since the early 1920s.

Fine Gael, in power for the past nine years, don’t want to talk to them.

Indeed, their leader, Micheál Martin, made it a key issue of the election campaign that he would not share power with Sinn Féin, complaining of their IRA past and high taxation policies.

Martin’s party suffered huge losses in the 2011 General Election after being blamed for wrecking the economy. They kept Fine Gael, once their bitter Civil War (1922-23) enemies, in power thanks to a “confidence and supply” arrangement over the past four years.

It’s fair to say that the traditional “big two” are now running scared.

While they continue posturing over the make-up of the next Government, Sinn Féin have organised a series of rallies around the country which have allowed them to engage with ordinary people.

By meeting in large hotel rooms and halls from Cork to Newry, and Galway to Dublin, the Taoiseach (Prime Minister) Leo Varadkar has accused Sinn Féin of engaging in “a campaign of intimidation and bullying”.

But the public meetings have caught the imagination of the Irish public. About 800 people turned up at the first rally in Cork on February 24 and it was standing room only for those who managed to get into Liberty Hall in Dublin.

“Hundreds of thousands of people have come out and they have voted for change. They have given us now the possibility, for the first time ever, to lead a Government without Fianna Fáil and Fine Gael.

“And that is what we intend to do. That is our first choice, to make sure that we give a voice to the change that is there. Change needs to mean real change, not just in personnel but in policies. And Sinn Féin is committed to delivering that on behalf of everyone here.”

He talked about the crisis in Irish public hospitals, the elderly and sick people lying on trolleys, the 10,000 people sleeping in emergency accommodation every night, and accused Fianna Fáil and Fine Gael of “normalising” the crises in homelessness and health care.

“Well, Sinn Féin says never will we allow that kind of obscene behaviour to be normalised,” he told the gathering to loud applause.

“Unfortunately, we cannot accommodate everybody, but your showing here tonight has sent a clear signal to Micheál Martin and Leo Varadkar that no amount of bullying, of tactics, of aggressive words will ever sway the people of Ireland.”

They are also very conscious of the momentum “more of the same” would give to Sinn Féin as the main opposition party at a time when many voters have demanded change. Smaller parties such as the Social Democrats and the Greens also made significant gains.

In recent days, Sinn Féin have been demonised by the Dublin establishment. Senior politicians have claimed they are not a “normal party” and even the head of the Gardai (the Irish police force) has talked about shadowy figures hovering in the background.

Garda Commissioner Drew Harris claimed that the police forces on both sides of the border shared the view that a Provisional Army Council oversaw both the IRA and Sinn Féin.

Read More: Will the Irish always be in ‘the shadow of the gunman’?

But the images of a “campaign of bullying” conjured up by opponents in advance of this week’s rallies hardly reflected the scenes witnessed in hotels or meeting rooms in Cork, Dublin, or Newry, County Down.

People almost expected Donald Trump-style rallies, perhaps with rebel songs or chants in support of the IRA, but instead found that the Sinn Féin politicians genuinely wanted to hear the views of ordinary Irish people.

Their leader, Mary Lou McDonald, has seen the party’s number of seats in the Dáil rise from 22 to 37. They won the highest number of first preference votes (24.5%), but are still a long way off the 80 seats required to form a Government.

Sinn Féin would have won more seats if they had run more candidates, as they did not expect the huge surge in support at the outset of the campaign. In Newry on February 26, Ms McDonald said the best possible outcome would be for Sinn Féin to form a Government without either Fianna Fáil (38 seats) or Fine Gael (35).

"The worst possible outcome would be the return of the Fine Gael - Fianna Fáil government," she said. "But that is an increasing possibility."

?Newry is making its voice heard on #GovernmentForChange - a big míle buíochas to everyone for coming out tonight. We are talking, we are listening, we are working to bring about real change. Let’s keep the conversation going pic.twitter.com/LeT6cu2AWy

She also called on the traditional “big two” to respect the people who voted for Sinn Féin, despite the campaign to demonise them which had continued since the election.

“We respect your mandate, now it’s time that you respect ours,” she said.

Whatever else, the leaders of Fianna Fáil and Fine Gael can no longer disrespect or ignore the most popular political party across the island of Ireland.

Whether they go into government or not, momentum is now very much with Sinn Féin. No wonder the traditional parties are afraid.