TD David Cullinane says he won't "distance" himself from Sinn Féin's past, but that Ireland's General Election 2020 was about "the future." 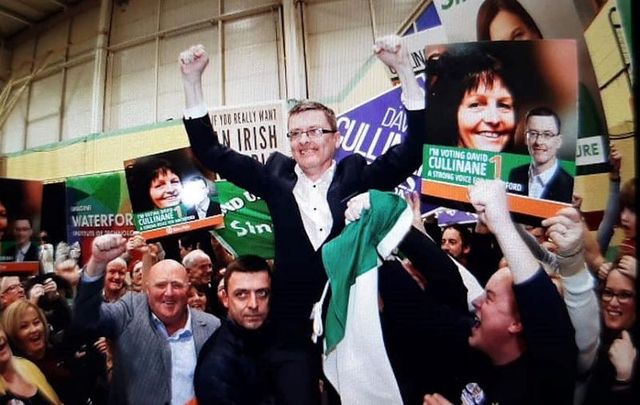 TD David Cullinane was filmed saying “Up the Republic, up the RA, Tiocfaidh ár Lá" after winning his constituency in Co Waterford on Sunday.

Sinn Féin TD David Cullinane has responded after a video of him saying “Up the Republic, up the RA, Tiocfaidh ár Lá” emerged after he won his Waterford constituency in a landfall during Ireland’s General Election on Sunday.

Read More: Sinn Féin at the crossroads - what's next for Ireland's most popular party?

Cullinane claimed an impressive victory on Sunday when he won 20,500 votes, winning his seat in the first count. He shared this video of him hearing his results to his Facebook page:

Kevin Lynch, who was among the hunger strikers who died in Maze Prison in 1981, had run in Cullinane's constituency in June 1981. Lynch collected 3,337 first preferences before being eliminated – after Labour Party and Fianna Fail candidates – on the fifth count, with 3,753 votes.

The video shows Cullinane concluding his speech by saying: “What we say is, up the Republic, up the Ra, and tiocfaidh ár lá.”

("Tiocfaidh ár lá," meaning “our day will come,” is a phrase associated with Irish republicanism.)

A video of Cullinane’s speech, reportedly recorded in a pub in Waterford, has since circulated online:

The day after the election results, Cullinane discussed the video Today FM: “I’ve never distanced myself at all from the IRA.

“I’m never one that will distance myself from Sinn Féin's past, from the IRA’s past. I don’t agree with everything the IRA did, of course I don’t.”

When asked what things the IRA have done that he agrees with, Cullinane says: “Do I think that Martin McGuinness was wrong to join the IRA? No, I don’t. That’s my politics.”

He continues: “The bottom line is the IRA is gone, it doesn’t mean that we don’t celebrate those and commemorate those volunteers.”

“I’m never going to distance myself from the hunger strikers and from people who joined the IRA for all sorts of different reasons. That’s a legacy issue.”

“The best way to put the IRA past firmly behind us was to make sure the IRA was gone. The IRA is gone. I am somebody who will not only not distance myself from the past, I am also somebody who is very thankful that that is the case, that we have finally for once and for all, that we have a very successful peace process.”

Cullinane adds: “I am never going to be somebody who is going to deny my past and my Republicanism and how I see the past. But the election campaign was about the future.”

Later in a press conference, Cullinane, standing alongside Sinn Fein president Mary Lou McDonald, told reporters: “Yesterday was a very emotional day for me...It was a long count and obviously we were very excited and very proud of the vote we got yesterday in Waterford.

Sinn Féin’s David Cullinane explains his comments at a celebration last night where he said “up the Ra” #GE2020 pic.twitter.com/tpOxf3mQ3o

“I know some people will think and maybe some people in the media will think that this was a comment about the here and the now and the future. They weren’t, it was reflecting back on that time in Irish history that I’m proud of and those hunger strikers and it was I suppose part of the excitement of the night when we were celebrating that victory.

“But my comments were about the past, they’re not about the future. The IRA is gone as everybody knows, and I celebrate that, the same as anybody else. We had a very successful peace process.

“What this election is about is the future. Our focus now will be the talks we were involved in, and the issues we campaigned on in this election; that’s the mandate that I got from the people of Waterford.”

When asked if he feels he should apologize, Cullinane said: “I don’t feel I have to apologize for reflecting back on that time period. What I’m saying is that I’m putting context on the comments that I made - I in no way meant that this was about the here and the now or the future.”

TD Cullinane said his comments were “in the context of a long day and a long night.”

“I certainly don’t set out to offend anyone, that’s not my style. I’m very proud of that republican legacy but I’m also very proud of what these people behind me can do over the next while if we’re given the opportunity.”

Mary Lou McDonald, the president of Sinn Féin, later added: "I've asked everybody not to be making throwaway comments or comments that can be misconstrued or distract us from the work ahead and I know that certainly, that's what happened in David's case.

"I'm not their mammy and I don't censor them either.

"We're all adults and I do expect people to behave in an adult way and to cooperate with their dear leader and not to create distractions."