Irish politics welcomed a new star on the horizon after yesterday's election with a woman, Mary Lou McDonald, leading her party Sinn Féin to an historic high vote according to the exit polling. 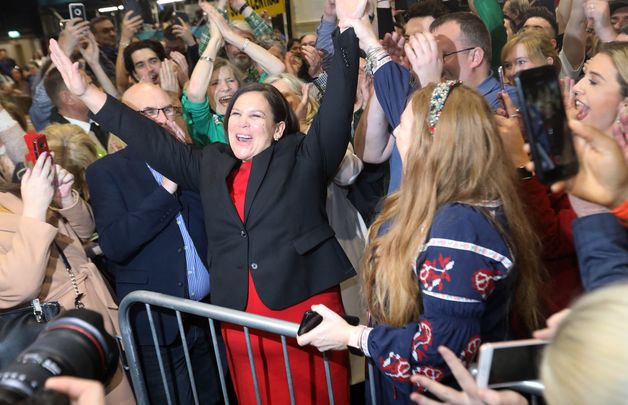 Irish politics welcomed a new star on the horizon after yesterday's election results with a woman, Mary Lou McDonald, leading her party Sinn Féin to a historic high vote.

In the process, McDonald put herself firmly in the frame to soon become Ireland’s first female leader.

McDonald and Sinn Féin have changed the political dynamic in Ireland forever with their vote share exceeding the Fine Gael and Fianna Fail parties. The party has jumped from ten percent in 2011 to 24 percent in this election.

Read More: Counting underway in Irish general election with Sinn Féin set for historic gains Consider this: Up to the late eighties the two main political parties combined would hoover up 80 percent or more of the vote in every general election.

No more and the Sinn Féin success was no fluke. They won every age group with the exception of the over 65 cohort.

It's been a remarkable journey.

Here is their electoral trajectory. 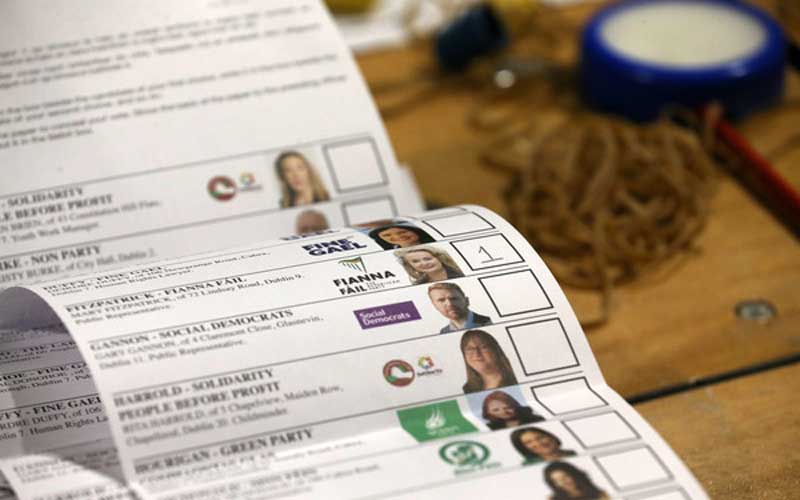 Women always had more trouble than men voting Sinn Féin but McDonald’s leadership addressed that issue. Holding her own and then some on the debate stage and crisscrossing the country with her message of a new beginning played powerfully with women and young voters alike and she became a political rock star.

She’s from a middle-class Dublin suburb, went to private school, attended Trinity College. She studied Sylvia Plath’s poetry at Trinity on her way to an English Literature degree and later took a Master’s degree in European Studies.

Married with two children, her husband works as an emergency dispatcher for the Irish Gas company. She’s a Rolling Stones fan, was a devoted follower of “House of Cards” and loves Agatha Christie thrillers.

Most unusually she joined Sinn Féin where her rise was rapid.  McDonald was initially a member of the Fianna Fail party in the late 1990s but joined Sinn Féin because, she said, “it had the perfect blend of national and freedom politics and social justice.”

“To be honest, because I grew up in Dublin and because there wasn’t a visible Sinn Féin organization where I lived, it took me a while to find my way in,” she told Irish Voice Newspaper, our sister publication.

“I’d say Sinn Féin couldn’t believe their luck when she joined. She’s such a good performer on radio and TV and it’s probably a help with southern voters that she doesn’t have a northern accent. All in all, it’s very hard for her political opponents to pick holes in her image.”She especially hits  a strong note with women.

“She’s better than any of the men,” Ann Smith, 75, a Dublin grandmother out walking her dog told The Guardian during the election. “She really fights. I love the way she talks to people, especially the men. She’s well able for them.”

Well, able she was. The biggest problem for her party is that they left seats on the table by not running enough candidates but they should still end up around 38 seats with the other two parties in the same range.

You need 80 seats to form a government so either Fiannna Fail or Fine Gael will have to resile from their blunt statements that they would never enter government with Sinn Féin.

It was a supremely idiotic stance given unionists in the North have had no problem governing with Sinn Féin. 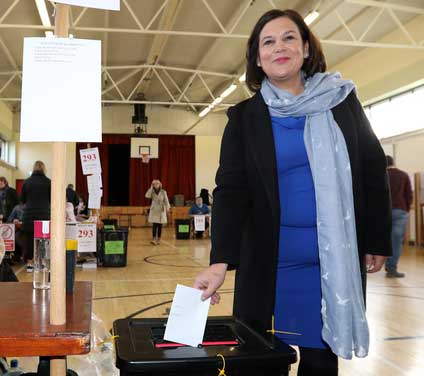 It also meant that their refusal to consider Sinn Féin made no sense, especially for a young electorate for whom the Northern Troubles  might as well be World War I.

The other option is for a Fine Gael/Fianna Fail coalition, but both parties know that in the long term one or other of the parties would be eclipsed and permanently damaged by such an arrangement. The evisceration of the Labour Party who are down to 5 percent or so of the vote shows the danger of spending long periods as the junior partner in government.

The current Fine Gael government which Fianna Fail props up without being in power can hardly be duplicated in a new parliament as neither party will be prepared to prop up the other because of the closeness of the vote between them.

We may be heading into Israeli territory here with another quick election and perhaps then another if no way out can be found which at the moment sounds like the situation. Fianna Fail might replace their leader, Michael Martin who has been especially vitriolic about Sinn Féin but that might cause a long term split.

What is clear is that it will take quite a while to sort out the mess if it can be sorted out but Sinn Féin won’t mind. They have broken the near 100-year two-party duopoly which has reigned over Irish politics forever. It was fitting that it was a woman, Mary Lou McDonald who shattered the green ceiling. Her day had finally come.