Donnchadh O'Laoghaire was the first candidate to be elected to the 33rd Dáil as Sinn Féin experienced a huge surge in popularity on General Election Day. 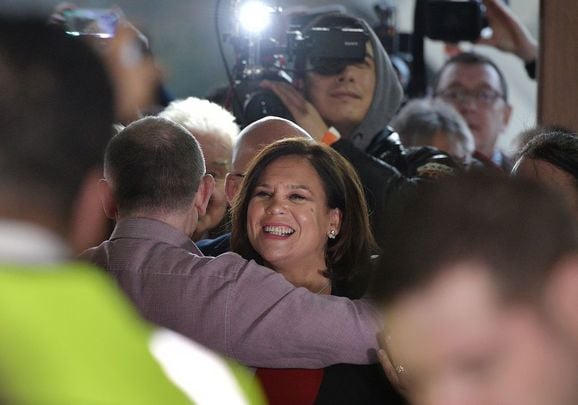 Sinn Féin's Donnchadh O'Laoghaire was the first candidate elected to the 33rd Dáil (Irish parliament), reflective of a stunning surge in support for the party across the country.

O'Laoghaire topped the poll in the Cork South-Central exceeding the 14,057 votes required to reach the quota. The Sinn Féin candidate beat Fianna Fáil leader Micheál Martin to top spot in the Cork constituency.

He was followed closely into the Dáil by fellow Sinn Féin candidate Johnny Guirke, who topped the polls in Meath-West with 30.5% of the first preference votes in the area.

The Irish Times predicts that Sinn Féin will secure a record 36 seats in the Dáil, at least, while Fine Gael and Fianna Fáil are expected to take about 39 seats and 44 seats respectively.

At the time of publishing, Sinn Féin had secured 29 seats while Fine Gael had taken 14 seats and Fianna Fáil had taken 16.

Sinn Féin performed even better than they were expected to in opinion polls taken in the week before the election, which predicted that they would take 28 seats in the government.

In constituencies across the country, Sinn Féin candidates topped the polls and upset the odds.

In Dublin West, the constituency of Taoiseach (Prime Minister) Leo Varadkar, Sinn Féin candidate Paul Donnelly topped the polls and finished  ahead of the incumbent Taoiseach, who wasn't elected until the fifth count.

It is the first time in Irish election history that a sitting Taoiseach will not top the polls in their own constituency.

It mirrors a nationwide trend which has seen a surge for support for Sinn Féin in typical Fianna Fáil and Fine Gael strongholds.

Many feel that the result is a protest to a growing housing and homelessness crisis in Ireland. Many also believe that the dismissive attitude of Fianna Fáil and Fine Gael towards Sinn Féin as a serious political party contributed to their popularity.

It has been an extremely disappointing election for the two hegemonic parties that have ruled the country since the foundation of the Irish State in 1922.

A number of high profile politicians are set to lose their seats as an increasingly disenfranchised electorate voted against the status quo.

There appears to be a number of prominent politicians in danger of losing their seat across the country, with former Tanáiste (Deputy Prime Minister) Joan Burton set to lose her seat.

Outgoing Minister for Transport, Tourism and Sport Shane Ross looks likely to lose his seat after a slew of unpopular decisions in 2019, while Minster for Children and Youth Affairs Katherine Zappone also appears to be in real danger of missing out to left-wing politician Paul Murphy.

All told, it was a seismic day in Irish politics that could possibly end the century-long dominance of two center-right political parties and usher in an era of left-wing politics for the first time in the history of the Irish State.