Acting Taoiseach Leo Varadkar will likely meet with President Donald Trump for St. Patrick's Day in the US as no government is in place yet in Ireland. 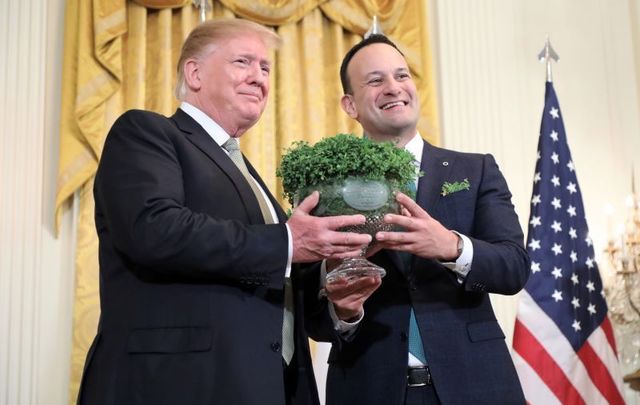 Acting Taoiseach Leo Varadkar said last week that he would travel to Washington, D.C. for the annual St. Patrick’s festivities at the White House and Capitol Hill which this year will take place on Thursday, March 12.

Varadkar has been acting in a caretaker capacity since last week’s meeting of the Dail, the first since the February 8 Irish election, failed to elect a taoiseach or confirm the formation of a new Irish government.

There is another meeting of the Dáil set for March 5 to elect a Taoiseach and form a government, but it is far from certain that this will happen given the gulf between the parties to date.  If a new Taoiseach is not elected, Varadkar will make the trip to D.C.

“I’ll travel to the White House and Capitol Hill. It will be a shortened trip this year in any case because if still in office I’ll need to return to the March meeting of the European Council which will be one of the most important in recent memory,” said Varadkar last week.

The Irish Times reports that White House officials have been in contact with Irish counterparts about this year’s program, which will also likely include the annual House Speaker’s luncheon on Capitol Hill hosted by Nancy Pelosi, and a morning breakfast hosted by Vice President Mike Pence at his official residence.

President Trump is expected to take part in a morning meeting on the 12th with Varadkar for the traditional exchange of shamrock. Whether he attends Pelosi’s lunch in the afternoon is uncertain given the state of relations between Pelosi and Trump; the president has attended the event each of the past three years.  Pelosi is the guest of honor at this year’s American Ireland Fund dinner in D.C. on March 11.

Irish government representation in other U.S. cities and throughout the world is still uncertain given that a government is not in place.