Simon Coveney briefed the US Ad-Hoc Committee to Protect the Good Friday Agreement while in Washington, DC on September 29. 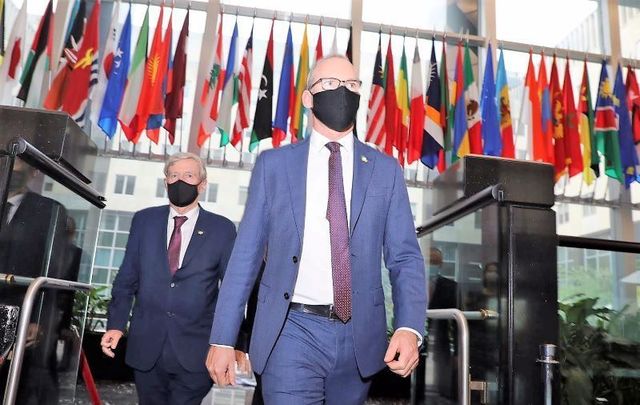 Simon Coveney, Ireland's Minister for Foreign Affairs, briefed The Ad-Hoc Committee to Protect the Good Friday Agreement on September 29 during his official visit to Washington, DC.

Ahead of his visit to Washington, DC, Coveney said in a statement: "There is a lot of interest in the United States on the implications Brexit will have for the island of Ireland, North and South. I will use this opportunity to thank our friends from across the political spectrum in the United States who have been vocal supporters of the Good Friday Agreement and who have advocated for the protection of the achievements of the peace process."

More than 30 members of the Committee, including John Fitzpatrick of the American Ireland Funds and leadership from the Ancient Order of Hibernians, attended a phone briefing with Minister Coveney on Tuesday.

Following the briefing, the Committee said in a statement that Minister Coveney "provided a detailed briefing on the intense negotiations now taking place and expressed Ireland's clear opposition to the effort by the UK government to breach the Northern Ireland Protocol of the Withdrawal Agreement which is an international treaty.

“He encouraged the Ad-Hoc Committee to remain vigilant and noted that the United States has been a powerful ally in making clear that there will be no chance of a UK/US trade deal being approved next year if the UK government continues to undercut the Good Friday Agreement.

“The Minister was forceful in making the case that Northern Ireland Protocol, which took three years to craft if fully implemented, was designed to protect the Good Friday Agreement.”

James Walsh, co-chair of the Committee, said: “The recent decision by the HMG [Her Majesty's Government] to demand that the language of the Internal Markets bill supersede the Northern Ireland Protocol is unhelpful and is close to an act of bad faith as far as we are concerned.

"The British government needs to show by its actions that it values the hard-won Good Friday Agreement which it was a signatory and remains obligated to fully implement.

"It is not hard to rekindle doubts among Irish Americans. British actions have led to a strong resurgence of interest among Irish Americans in the peace process and the Ad Hoc Committee has recruited many new members. Building a green wall to protect the GFA is something we know how to do.”

Committee co-chair Bruce Morrison said that Coveney also made clear that the European Union is prepared to get a trade deal done that protects the Good Friday Agreement.

“We were encouraged by the optimistic tone of the Minister regarding the prospects of a trade deal sufficient to alleviate any risk to the NI Protocol," Morrison said. "We were even more encouraged that he was confident that even in the absence of a deal, the EU can be expected to enforce the Protocol—a binding treaty under international law—and not be forced to defend the EU single market with any enforcement at the border on the island of Ireland.

"The British may think they can shift the obligation to defend the single market to the Irish, but we were assured that any such effort will fail.”