Nancy Pelosi has warned Boris Johnson that the United States will scupper any trade deal with Britain if Irish border is affected. 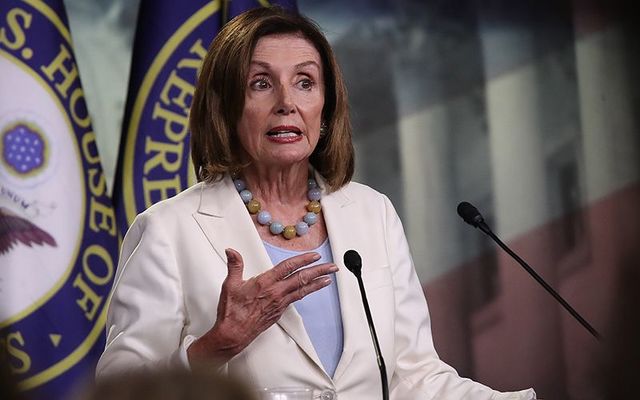 Speaker of the US House of Representatives, Nancy Pelosi, has warned British PM Boris Johnson over Brexit backstop threats. Getty

Nancy Pelosi has warned Boris Johnson that the United States will scupper any trade deal with Britain if Irish border is affected.

Nancy Pelosi, the Speaker of the US House of Representatives, has warned Britain’s new Prime Minister Boris Johnson that Congress will not accept a new trade deal if the Belfast Agreement was jeopardized by Brexit.

Speaking to the Irish Times Pelosi stated “We made it clear in our conversations with senior members of the Conservative Party earlier this year that there should be no return to a hard border on the island. That position has not changed. Any trade deal between the US and Great Britain would have to be cognizant of that.”

She stated the issue of Northern Ireland was foremost in the minds of the US Congress as a no-deal Brexit looked more likely.

Pelosi and Friends of Ireland head, Richie Neal, can block any trade deal between Britain and the US.

Neal is Chairman of the powerful Ways and Means Committee, which scrutinizes every trade deal and can withhold approval.

Her words provide welcome assurance for an Irish government taken aback by the aggressive posture of Boris Johnson since coming to power. Johnson said he will end the backstop previously agreed by former Prime Minister Theresa May.

The Times reports that “Pelosi said during a visit to London in April that there would be ‘no chance whatsoever’ of a US-UK trade deal if the Northern Ireland peace agreement was weakened by Brexit.”

He said Ireland required a “legally operable and legally binding assurance ... that no matter what else may happen as a consequence of Brexit, we won’t see the emergence of a hard border between North and South, we won’t see the North and the South drift apart in any way.”