Less than a week until the US presidential election, Irish and Irish Americans in New York City discuss who they're voting for and why. 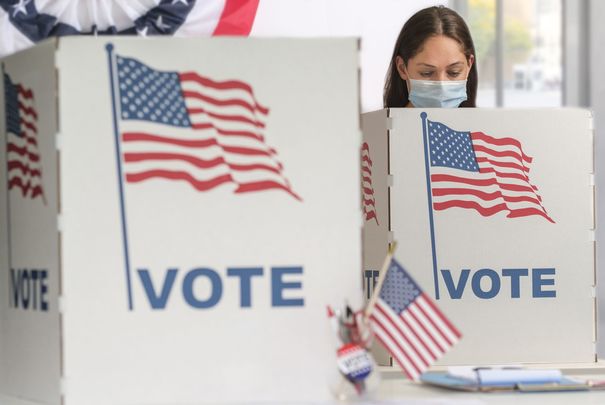 Less than a week until election day in the US, Irish and Irish Americans in New York City discuss who they're voting for and why. Getty Images

Election Day is upon us. The Irish Voice newspaper, sister publication to IrishCentral, wholeheartedly endorses Joe Biden to become our 46th president, but some voters who we asked had other opinions.

There's talk of a “shy Trump vote” out there that could mean the polls showing a big election victory for Joe Biden are actually tighter than the numbers indicate.

We’ll find out soon enough, but in reaching out for comments on this story I spoke to more than one Trump supporter who plans to enthusiastically vote for him on Election Day…but wasn’t willing to say so on the record.

The Biden boosters are happy to telegraph their support, feel exhausted by the past four years, and can’t fathom Trump Part II.

So here goes…a sampling of how Irish American New Yorkers of all persuasions plan to cast their votes, and how they came to their decision.

Owner of Daly Communications, a public relations company that promotes a number of Irish entertainers including Celtic Woman.

I had the news on the day Donald Trump came down the elevator and said Mexicans were rapists and murderers. I could not believe my ears. I had to call my husband at work and tell him how outraged I was.

Everything I had learned in my Irish Catholic home where my mother was a Republican and my father was a Democrat and Jesus said “do unto others” was just blown out the window by this snake oil salesman.

Flash to 2020.  I work in the entertainment business, specifically with Irish musicians touring in the U.S. In March that ended. In fact, the whole live entertainment music scene died.

With no plan from the federal government, we have no idea when or if it will come back. The Republican-led Senate is not agreeing to work with the Democratic Congress on a relief bill. No acknowledgment that people are really hurting from this pandemic.

Three quarters of my business revenue is gone. This person has no plan on how to help us.

But enough about me. Children at the border with no way to find their parents, Black Lives Matter, the rights of LGBTQ folks, packing the Supreme Court, women's right to choose, and so on. The lack of empathy and the love of greed.

That is why I am voting blue.

I voted for Joe Biden. Not because he is brilliant, but I cannot abide by Trump. He is a liar, a hypocrite, a draft dodger, a tax dodger, an adulterer, an abuser of women, a child killer, a fake patriot.  Not all conservatives are stupid, but all stupid people are conservative.

Any Irish person who votes Trump shames us because we have had centuries of British Trumps and Irish traitors.  John McDonagh and myself try to show the best of what we are on WBAI FM 99.5 every Sunday. Our nobility, our literacy, our poetry, our decency.

To vote for Trump, America’s hemorrhoid, is a betrayal of all we believe in.

Vice-chair of the Irish Arts Center in Manhattan.

The sun will rise on November 4 without regard to who won the U.S. election and we will have to get on with living together, no matter what the result.

I will be voting for the party and the person that I believe is best to lead the country for the next four years, which happens to be Joe Biden and the Democratic Party, but I have friends, whom I have known for many years and love with all my heart, who will be voting for the Republican Party for their own reasons that they don't need to explain to me, nor I to them.

What concerns me more is the mental health stress that this election is creating. I think it's really important for all of us to commit to spend as much time watching positive stories, connecting with friends, playing with our kids or pets, reading a great book, as we do watching the news or reading political posts. We need to live today, and every day leading up to the election, and after, like it's precious. Because it is.

I have not voted for my former fellow Queens resident. I am voting for Howie Hawkins of the Green Party.

The Green Party has a long relationship with WBAI FM 99.5, the radio station that I have been affiliated with for 40 years. Grandpa Al Lewis and my fellow radio co-host Malachy McCourt have run for New York State governor in years gone by on the Green Party ticket.

It's also a vote against Governor Andrew Cuomo, who is determined to keep third parties off the ballot with new regulations that third parties need to get over 130,000 votes instead of the current 50,000 votes to have ballot access for future elections without gathering signatures.

We will be having an election special this Sunday [November 1] on WBAI.org at 11 am with David Rothenberg, founder of the Fortune Society, Malachy, and myself. We will be taking listener phone calls -- always makes for a good time.

Looking forward to the end of the pandemic, when I can finally bring my one man play Off the Meter about driving a yellow cab in New York City over to Ireland.

Five years ago I didn’t have much time for Donald Trump. I thought he was ignorant, not fit for office – but then I saw another side. He was being misrepresented by the media and taken out of context all of the time.

He has been a great president. I will absolutely be voting for him so that he gets another term in office.

The media has actively worked against President Trump. I admit, sometimes I cringe when he talks or tweets, but the media has been totally against him and they have been wrong.

After Trump became president I was impressed. He stood up for America on the world stage. He made NATO members pay their fair share, instead of having American taxpayers foot the bill. Donald Trump made it clear that America will not be disrespected.

He was forced to deal with the Mueller Report which showed nothing. He had to go through impeachment because of the hatred the left has for him.  And none of it worked.

Could the president have been better on the coronavirus? Yes. And so could everyone else. We didn’t know as much in the beginning as we do now.

President Trump will revive our economy which was crashed because of Covid. He built it before and he will build it again. No way would Joe Biden do as good a job.

President Trump totally supports our military, our police departments, our law enforcement. He supports the Second Amendment which is so important.

And I support Donald Trump for another four years.

Four years ago, after eight years of Obama fatigue and decades of Clinton exhaustion, Donald Trump was sent to the White House. As a lifelong Republican and conservative, I understood the vote for Trump, but I just couldn’t do it.

I have a great respect for our institutions and for the office of the president. Having watched Trump throughout the 2016 campaign, I knew he would not dignify the office.

I choose to write-in my former boss and a man of high integrity and completely qualified to be president, George Pataki. Next Tuesday, when I vote in person, I shall once again cast my ballot for Governor George Pataki of New York.

Four years ago on the night of the 2016 election, I was an overnight volunteer at the local church shelter. Around the table, I sat with a group of homeless men including some veterans.

After a dinner prepared by kind neighbors, we watched the results come in. There was compassion and hope in the room. While Hillary Clinton won the popular vote by three million, she lost to the Electoral College to Donald Trump.

We went to our beds stunned by the result. I could hardly sleep.

We have endured and suffered the four years of President Donald Trump. Most impacted were the likes of the men who sat at the church table -- the poor, people of color, veterans, and undocumented day laborers.

I’ve been campaigning for Joe Biden in the neighborhood, by phone and will travel to Pennsylvania this coming weekend.

We are at a moral and political crossroads like never in our lifetime.  Future generations will remember our votes and our choices.

Silence is not an option. Every vote for Joe Biden is a vote to restore healing to America and hope to our world.