More than 66 percent of over 1,000 respondents said they are supporting this major candidate ahead of the US presidential election. 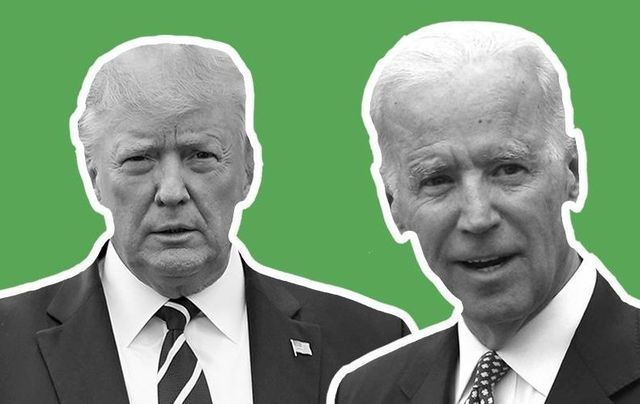 IrishCentral readers are strongly supporting one major US presidential candidate over the other. Seamus Kiernan

The results are in, and the data clearly shows that IrishCentral readers are supporting the Democratic ticket of former Vice President Joe Biden and Senator Kamala Harris.

Accounting for just over three percent of the vote were respondents who said they were supporting someone else. 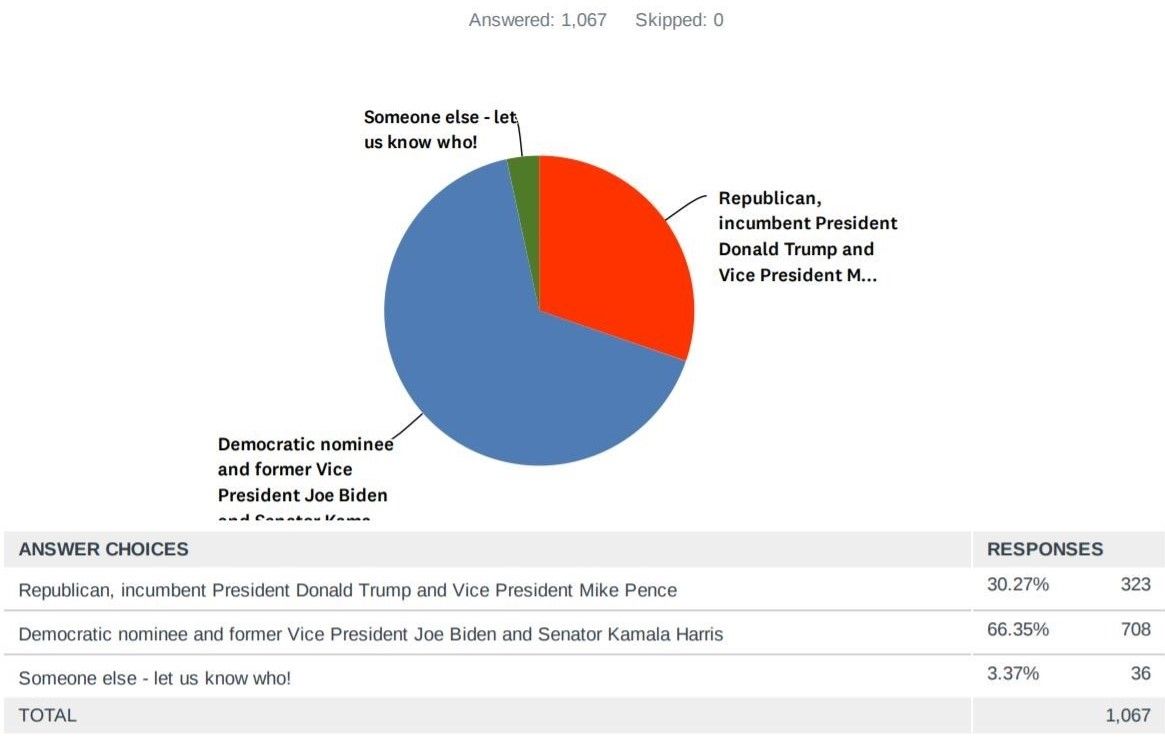 Results from our IrishCentral Readers Survey

Responses from people who said they are supporting Democrats Biden - Harris:

"I fear for my family, my friends and the even greater atrocities that will be perpetuated in the name of the president's attempts to 'make America great again' when the reality is a loss of freedom, lack of safety and security for our citizens, and an increase in oppression, violence, racism, and hatred. I can now better understand how during the Civil War brother fought against brother. I do not want that future, one of fear, violence, and death for my children or the greater suffering of my people to be on my conscience. I vote Biden in hopes of not killing the planet, protecting those who do not have a voice, including all people as equals, having a voice over what is done with my own body, embracing our differences, and being able to turn on a radio or tv without having to cringe while shaking my head in disbelief at the newest immoral action being condoned under a blanket of lies that is destroying our once great country all in the name of 'making America Great' when I cannot understand why people are not out protesting in the streets over all the injustice happening around our country during this last presidency."

"Trump does not care for so many of the issues that are affecting the American people here in the US and around the world. He loves to be in power and cares only about himself. We have had no leadership through Covid-19, The middle class is shrinking now more than ever. He has no idea about foreign relations and how to govern for the economy at all!"

"How about 215K...and counting deaths from Covid? How about calling veterans 'suckers and losers'? I have a father and uncle interred at Arlington, How about preferring Putin over Us Intelligence agencies? This so-called man is the very worst person in our history to be where he is. Needless to say, I am voting for Joe Biden....in part to bring decency and honor back to my country."

"Trump is corrupt, misogynist, and racist.  He does not accept accountability and surrounds himself with incompetent, weak, or corrupt individuals.  He is destroying international alliances and the US economy favoring the rich at the expense of the middle class and less well off.  He is leaving the US with a massive trade deficit, high unemployment, and is overseeing a huge increase in national debt.   Biden on the other hand will work hard to try to reunite the country, will surround himself with talented servants whose interest will be to rebuild the USA, and Biden will rebuild critical alliances such as in the EU, the Americas, and Asia."

"Trump is a disgrace. Makes me want to move to Ireland."

"He’s honest and Irish! Unlike Trump!"

"Because Trump is trying to take away all that this country stands for and all that my Father, Great Grandfather, Uncles and cousins fought many wars to first establish and then to protect.  One of my Great Grandfathers emigrated from Ireland to this great country to provide a better future for his family, I now see it eroding away and it hurts."

"Because I believe he is going to be the one, which saves the American Democracy from a closet Traitor Donald Trump. Plus Joe Biden is a Son of County Mayo and has given a Cancer Ward to his ancestors hospital in Mayo just a 1Short ride from my Home Village of Trein Roscommon. Vote for Joe save America."

Responses from people who said they are supporting Republicans Trump - Pence:

"If Trump is not elected again this country will fall into socialism."

"He's done more for the country in the last four years than Biden has in all of his time in Congress and the White House."

"Neither are satisfactory, but surely it is near impossible to even contemplate supporting Trump.  America is currently being damaged beyond our wildest imaginings."

"President Trump has done a satisfactory job and is now in the position to know more and do better. Biden is senile and unfit as is Harris, a liberal in my opinion. They scare me for my country. They have allowed this anarchy to continue via Democratic mayors, governors, etc. and I am very scared of this mindset of violence they perpetuate by not allowing the president to send them help to stop it. It is unsafe for most of us to go anywhere as violence can erupt anytime or any place."

"Because he is not a 'politician.' Runs the country like a business and gets results. Proved he is capable of great economic improvements. Puts America first in trade negotiations. Confident he will make improvements to the health care system."

"He will get the greatest economy going in the world going again. He will protect you Europeans from Russia regardless that Europe is not paying your fair share. He has made us energy independent from OPEC while our companies are working on alternate forms of energy. He has built up our military so that we have peace through strength. He is bringing back jobs to our country from elsewhere in the world. He is cracking down on China who is the biggest aggressor in the world in all ways. He has put sanctions on Iran to stop their terrorist factions in the world. He has gotten the Middle East peace process going again with a plan that will work. He has reined in North Korea’s saber-rattling of threats. He has put our country first for our citizens and tried to close off illegal immigration. He has lowered our taxes. He saved lives from the coronavirus by closing off air traffic from China early in January. He got medical supply manufacturers and others to get going to make the supplies needed to protect people from the virus at warp speed. He has recognized Jerusalem as Israel’s capital. He has kept his promises of what he said he would do for his first four years in office. He has done all this work for us against the democrat party hatred of him and those who would try to tear him down. Biden is only an empty shell and would be a puppet of the liberal socialist left telling him what to do. We need a strong leader and President Trump is the best President for us since Eisenhower."

"Past accomplishments. Policies. Anti-Socialist agenda.  Support for police.  I don’t care for his demeanor.  I think he’s his own worst enemy, but I can’t support the direction the Democratic party wants to take the country."

"Outstanding record of promises kept, advancing the USA, and all while the Liberal Socialist Progressives did everything they could think of to get rid of him.  Lowest Black unemployment, lowest Hispanic unemployment, lowest women's unemployment,  reduced middle-class taxes, economic growth over 4%.  Biden and Obama said 1% was the new normal."

"Trump is not a smooth-talking politician and he needs 4 more years."

Responses from people who said they are supporting someone else:

"Because the Green Party platform is closer to my stance on environmental issues, social justice, pacifism. and health care reform than either the Democrats or Republicans. Also, Trump, Pence, Biden, and Harris are horrible candidates with abysmal records. There's not one of them who'd make a decent president."

"The 2 major parties have again failed to offer quality candidates. It's time to bring someone in with new ideas."