Cross-border farms are being forced to decide where they wish the primary base of their business to operate. 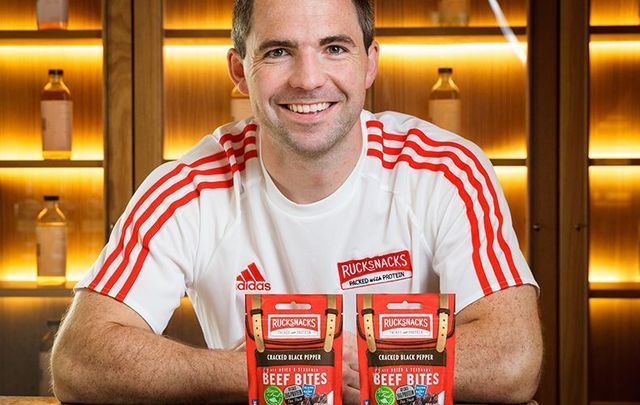 Colm Connolly with packets of his Rucksnacks.

Cross-border farms are being forced to decide where they wish the primary base of their business to operate.

Right now they share their cow version of national identity with fellow bovines only a short distance away, over the border in Northern Ireland.

Brexit will change this.

While much debate has gone into who will be flashing what brand of passport after the UK - with Northern Ireland reluctantly in tow - departs the EU, less has been said about the identity tags on cattle, sheep, pigs and other hoofed inhabitants of the island of Ireland.

Connolly, whose County Monaghan farm nuzzles up to the border, is focused on Brexit big time - and for more reasons than just his cows.

He is also a businessman behind “Rucksnacks,” an Irish version of a popular American food, beef jerky.

Connolly was at the recent National Ploughing Championships in Tullamore, County Offaly to launch new flavors for Rucksnacks - Sweet Chili and Honey Roast - to go along with the existing Black Pepper flavor.

Rucksnacks, no matter what the flavor, is a grass-fed beef jerky snack with only 89 calories per serving. With no added sugar, no gluten and no allergens - it is, according to Connolly, “a quality Irish food that ticks a lot of health boxes as a lean protein snack.”

Connolly’s business depends on exports, in large part to the UK, so Brexit is about as welcome as a stampede towards an open gate.

The 30-year-old fifth-generation farmer from Clones launched Rucksnacks in 2016.

It was a cross-border business with a production facility in the North.

With Brexit on the way, Connolly is having to make a choice between the UK and EU.

He recently moved what was a newly expanded facility in the North to Ballybay in County Monaghan.

“I always wanted to base our production locally and luckily found a facility in County Monaghan to be able to produce our beef snacks near the family farm in Clones,” said Connolly.

“Brexit uncertainty means that many border businesses, like Rucksnacks, are having to plan for a trading future in the EU, but at a greater market distance from our traditionally closest trading partner, the UK.

“This is a new concept for a lot of farmers in Ireland, and particularly for beef farmers like myself with half of all Irish beef exports going to the UK.

“Weakened Sterling has been another blow for exporters. Irish farmers will need some form of future EU assistance in the wake of Brexit in order to survive the impact as they will be the hardest hit.”

While the UK is a critically important trading partner for Irish business, and in particular for the Irish agri-food sector (39 percent of all Irish agri-food exports - €4.8 billion - went to the UK in 2016) Colm Connolly remains optimistic for the future.

But the future, one in which Bulgaria will be in some respects closer to Connolly’s fields than Belfast, will require changes.

“Young farmers, like myself, need to diversify. Farming alone is not enough to sustain a family anymore. I’m grateful to have had support from Enterprise Ireland and that SuperValu (an Irish supermarket chain) are stocking Rucksnacks with many other retailers and gyms coming on-board,” he says.

“If we want young people to keep farming the land and producing high-quality food, then we it needs to be a viable career.

“This is something to take into account looking at the Common Agricultural Policy post-2020. Farmers need support, but Single Farm Payments should be capped at €100,000 - that would mean a fairer distribution of what will probably be a tighter CAP budget post-Brexit.”