Everything has changed...Brexit is going to hit Ireland harder than any other country in Europe. 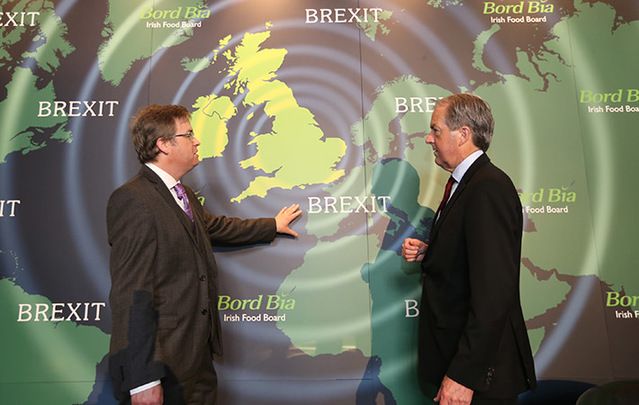 The fallout from the Brexit vote began to emerge here last week, despite the best efforts of the Irish government to carry on as though nothing has changed.

In fact everything has changed. As we said here last week, Brexit is going to hit Ireland harder than any other country in Europe.

Despite this, our political leaders here are adopting the Three Wise Monkeys approach – see no evil, hear no evil, speak no evil. They are doing this on the basis that nothing is going to happen immediately because it will take a minimum of two years for the U.K. to actually leave the EU and probably even longer than that to negotiate trade deals with the EU that would affect us. So the official attitude appears to be to play it all down as much as possible.

But minimizing it or just wishing it away is not going to get rid of this almighty headache. The problem is here to stay, and even though Britain will be a member of the EU for at least another two years we are already seeing the consequences of the uncertainty that has been created.

Last week there was both political and economic fallout. At the political level Taoiseach Enda Kenny had the worst week since the new government was formed, with members of his own party even saying it was time he retired.

Read more: Enda Kenny says he will not step down as Irish leader

Fine Gael needs a younger, more dynamic leader if they are to have any chance at the next election, and the sooner they make the change the better. The main opposition party, Fianna Fail, are now way ahead according to the latest opinion poll despite being the people who wrecked the country a few years back.

Kenny has been particularly inept in his attempts to address Brexit. He looked extremely foolish a week ago when his big idea for an all-Ireland forum to assess the consequences of Brexit for both parts of Ireland was rejected by the First Minister for Northern Ireland, Arlene Foster. The no-nonsense Democratic Unionist Party (DUP) leader dismissed the idea out of hand in front of the media at a joint press conference with Kenny.

It was beyond embarrassing. She said later that she had not been given advance warning of the proposal and was not going to allow herself to be bounced into it.

The fact that the advance work had not been done with the DUP shows the level of disorganization there is at government level here now. Increasingly, Kenny is looking like a lame duck and his sticking plaster cabinet is all over the place, with the independent members saying whatever they like.

Fine Gael, despite being the biggest party, has been forced into awkward positions on several difficult issues, most recently on proposals for limited abortion. At the very time the country needs strong and coherent leadership Kenny is dithering, and the young bloods in his party are positioning themselves for a challenge.

Brexit has made this worse, but it's not just political fallout that is evident here. It's also economic.

The fact that the London Stock Exchange has regained all the value it lost after the shock U.K. exit vote has led some Irish politicians to hope that the British economy may hold up and, therefore, that the effect on our trade with the U.K. may not be so great. But the recovery in the FTSE (the top 100 shares in the London market) means little.

A lot of the big stocks listed there are major international companies for which the British market is only a minor part of their overall business. They are not so vulnerable to the predicted post-Brexit recession in the U.K.

If Britain is out of the Single Market the big losers will be the small and medium sized British businesses which export into Europe. A recession in the U.K. is virtually guaranteed, and one can see that already in the fall in the value of sterling, the British pound.

This is much more relevant for Ireland and instructive for us on what lies ahead. Sterling is now down around 15 percent on the average rate against the euro last year. So if you are one of the many small and medium-sized businesses in Ireland that export to the U.K., you are now getting 15 percent less for your products or services than you did a year ago.

Read more: What Theresa May as British PM will mean for Brexit and Ireland

Given the tight margins most businesses operate on, that probably means your profit has been wiped out and you are making a loss. If it continues – and there is no sign of sterling recovering – you are in serious trouble.

It's not just SMEs (the small and medium-sized enterprises which employ the most people here) who are feeling the pain and are fearful for the future. Bigger exporters to the U.K., which is still our biggest market, are also suffering.

Our meat exports are worth just over €1 billion euro a year, and they are already being hit by the fall in the value of sterling. Last week farmers here were accusing the Irish meat factories of using Brexit to cut cattle prices immediately even though many are hedged against currency fluctuations for at least a year.

It would surprise no one if the meat factories here were doing this, but the fact is that the medium and long-term outlook is grim for all our food exports to Britain. If Brexit finally happens and we are still in the EU we will face not only the fall in the value of sterling, but new tariffs on our produce arriving in the U.K. and increased competition from food exporting countries around the world who will have new access to the British market.

This is not just a problem in relation to our food exports. The EU tariff wall for food produce coming from non-EU countries is much higher than for manufactured products or services.

But even the lower tariff wall on manufactured goods and services has given our non-food exports a slight advantage over global competitors in the U.K. market. That ends when Britain leaves the EU and the British market becomes a level playing field for exporters around the world.

As if all this uncertainty was not enough for Ireland, the former British Chancellor of the Exchequer revealed plans to cut Britain's corporate tax rate to 15 percent or less. His aim was to encourage foreign multi-national companies to continue to invest in the U.K. even though they won't have free access to the EU Single Market from the U.K. when Britain has left the EU. How his successor views these issues is unclear as I write this.

That will obviously have a direct effect on the amount of Foreign Direct Investment (FDI) Ireland attracts with its much publicized 12.5 percent corporate tax rate. Contrary to the impression some people have, Britain already attracts far more FDI than Ireland does.

A reduction on this scale in the U.K. corporate tax rate would be bound to steer a significant amount of FDI away from us and into the U.K. in the future. How much that will affect future investment planning of big players like Apple, Google and so on remains to be seen. Yes, we will be able to offer direct access to the Single Market, but our tax advantage will be gone.

The London-based Centre for Economics and Business Research (CEBR) said this week that its research showed that the proposed cut in corporate tax to 15 percent would boost FDI into the U.K. by just under 11 percent. A CEBR executive told the Irish Independent that there is a push in the U.K. to cut the corporate tax rate further, with one eye on the success achieved by Ireland. "We're copying you," he told the reporter.

This is very worrying for Ireland, given our very high dependence on FDI and on all the big American companies that are here. It may or may not happen but it does seem likely. It's just one of the unforeseen possible fallouts from Brexit that could affect us badly.

All we can do is hope that British voters may come to their senses in a few years when the full details of what Brexit will do to the British economy and trade with the EU will become clear. If that happens they could demand another referendum and reverse this ridiculous situation.

Then we in Ireland could breathe normally again and pretend we never had this terrible nightmare.

Read more: Irish passport forms sell for $130 on eBay due to Brexit panic