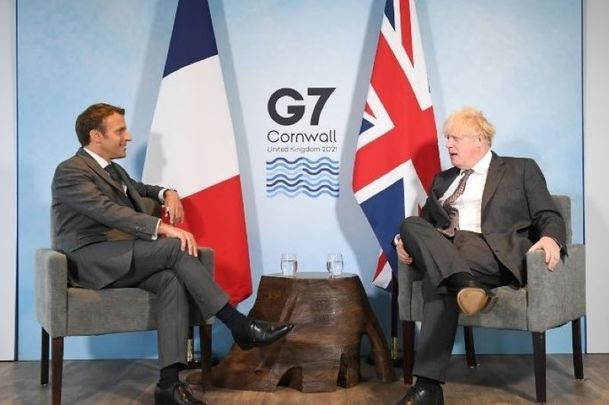 French President Emmanuel Macron reportedly suggested that Northern Ireland is not part of the United Kingdom during a row with British Prime Minister Boris Johnson over the Brexit Withdrawal Agreement.

In a tetchy private exchange during the G7 summit in Cornwall, Johnson is believed to have asked Macron how he would feel if French courts prevented him from moving sausages from Toulouse to Paris.

Macron responded by saying that it was "not a good comparison because Paris and Toulouse are part of the same country", according to a UK government source.

The French President's reply reportedly sparked a furious reaction from Johnson, who reminded Macron that "Northern Ireland and Britain are part of the same country as well".

Johnson later said that EU leaders "seem to misunderstand that the UK is a single country, a single territory. I just need to get that into their heads".

Newly-appointed DUP leader Edwin Poots also responded to reports of Macron's comments by sending the French President a copy of the Good Friday Agreement to remind him of Northern Ireland's constitutional status.

"Emmanuel Macron’s suggestion that Northern Ireland is not part of the United Kingdom is offensive and demands a statement from the French administration which recognizes Northern Ireland’s constitutional status," Poots said.

"This also exposes the ignorance which lies at the heart of the EU. They seem blind to the destruction the protocol has caused to the Belfast Agreement."

(Notably, the DUP was the only major political party in Northern Ireland to not sign the Good Friday Agreement in 1998.)

Evidently key leaders in the EU do not understand the basics let alone the finer details.

"We have serially seen senior EU figures talk about Northern Ireland as if it was some kind of different country to the UK. It is not only offensive, it has real-world effects on the communities in Northern Ireland, creates great concern, great consternation," Raab told Sky News.

"Could you imagine if we talked about Catalonia, the Flemish part of Belgium, one of the landers in Germany, northern Italy, Corsica in France as different countries? We need a bit of respect here."

However, Macron's office disputed the account of the exchange between Johnson and the French President.

A spokesperson said that Macron was simply pointing out that Toulouse and France are part of the same geographic area and that Northern Ireland is on a separate island from the rest of the United Kingdom.

"The president wants to highlight that the situation was quite different and that it wasn’t right to draw this kind of comparison," said a spokesperson for the Élysée Palace.

The Northern Ireland Protocol came into force on January 1, 2021, and effectively created a customs border in the Irish Sea for certain goods traveling between the UK and Northern Ireland.

However, a fresh row has broken out over the Protocol due to the impending ban on chilled meats, which is set to come into force on July 1. EU food safety regulations allow only frozen meats to enter the Single Market, meaning that the import of chilled meats such as sausages will be prohibited from the start of next month.

The EU does not allow the import of chilled meats from countries outside the Single Market because it cannot guarantee that health and safety standards were met.

The British Government has faced criticism for unilaterally extending the grace period for goods coming into Northern Ireland from the UK, with Taoiseach Micheál Martin claiming that the unilateral decisions are undermining the relationship between the EU and the UK.