As Enda Kenny and Donald Trump met and shook hands at the White House, Trump said he plans to visit Ireland while in office. 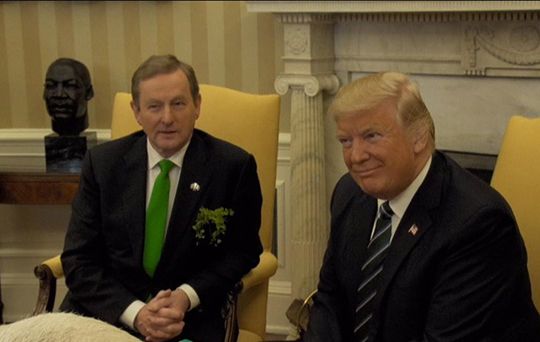 As Enda Kenny and Donald Trump met and shook hands at the White House, Trump said he plans to visit Ireland while in office. Catriona Perry of RTE / Twitter

The much-hyped first St. Patrick’s Day celebrations of the Trump White House are underway in D.C., as Ireland’s Taoiseach (Prime Minister) Enda Kenny and President Donald Trump shook hands, took a few questions from reporters, and then retreated for a closed door meeting.

Asked by Catriona Perry of RTE, Ireland’s national broadcaster, if he has any plans to visit Ireland, Trump said “I love Ireland. I really love Ireland. I’ll be back… Absolutely, I’ll be there for sure.”

Trump owns a golf course in Ireland, in Doonbeg, Co. Clare. He was scheduled to make a brief visit in June, during the campaign, but canceled it at the last minute.

The Trump - Kenny meeting has been highly anticipated for a number of reasons, from the thousands of Irish who petitioned for their leader to boycott the traditional Paddy’s Day White House visit, to Kenny’s vow that he would defend the EU to the new president and raise the issue of legalization for the 50,000 undocumented Irish in US, to Kenny’s remarks during the 2016 election that Trump’s language was “racist and dangerous.”

Asked about those remarks during a press conference on Wednesday, Kenny defended his comments, suggesting Trump’s language was not necessarily a reflection of him personally.

“I did not refer to the person, the now president, as being racist. My comment was in respect of his language.

“Language and words can be used by people in many regards...My comment was when he was running as a candidate in respect of the election to be held.”

Enda Kenny explains that a person who uses racist language is not necessarily racist pic.twitter.com/mQx4CujiGy

Kenny started his day in the nation’s capital with a breakfast at the residence of Vice President Mike Pence. The Vice President spoke about the importance of his Irish roots the night before, at the American Ireland Fund’s DC gala.

Karen & I welcomed Taoiseach Kenny & Mrs. Kenny to our home for an Irish breakfast. Snow needs to melt before trying my new hurley. pic.twitter.com/Sr4uWT2yHL

Following the meeting in the Oval Offivce, Trump accompanied Kenny to Congress. In a brief address, he praised his "new friend" and his wife Fionnula.

Pres @realDonaldTrump refers to his "new friend" the Taoiseach and his wife Fionnuala "she's really something special" @rtenews pic.twitter.com/aTPVss0lkB

Still on the agenda for today is House Speaker Paul Ryan’s St. Patrick's’ Day lunch on Capitol Hill, and then it’s back to the White House for the traditional presentation of the shamrocks, followed by a reception welcoming members of the Irish American community.